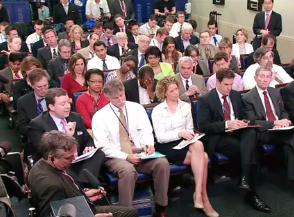 It’s the story that won’t die, mainly because reporters refuse to give up asking about it. Of course it’s the issue of President Obama’s birth certificate and whether it truly exists. Donald Trump suggests it might be missing, but the White House claims, and now CNN’s Anderson Cooper (after conducting an investigation) confirms, Obama was in fact born in Hawaii. Yet when it came time for CNN’s Ed Henry to ask a question today of White House press secretary Jay Carney, whose opinion on the issue do you think he gave voice to?

If you guessed Henry would have believed the investigative work of his CNN colleagues over giving new life to Trump’s allegations, then you lose this round of everyone’s favorite game “why do some stories never die?” Nope, Henry instead asked Carney:

“As part of that CNN story you mentioned we noted that there is a certificate of live birth, which is considered in the state of Hawaii settled that he was born in the United States, period. However, Trump and others keep saying that that’s not the actual birth certificate, and as you know, Hawaii Department of Health says that you can request a birth certificate; you put in a Freedom of Information request, and within a few weeks you’ll get a copy out of the vault. Why doesn’t the President do that?”

Carney responded that it’s a “distraction” that some (hint, hint: Henry) keep wanting to focus on. Yet given that Cooper promised to finish the “definitive investigation” of the “Birther” claims on his CNN show tonight, maybe Henry just wanted to help serve the ball up so Cooper could spike it down?

Watch the clip of the press briefing from the White House website below: