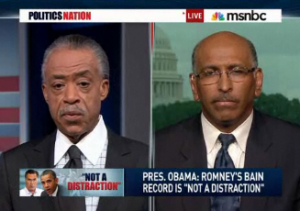 Sharpton began with Rendell, asking whether Bain is fair game in the general election campaign. Rendell agreed that it is: Romney made his Bain experience “a central point” in his argument for the presidency, he said, so “a full exam” of the firm’s record “is only fair.” He added that we do need private equity — but creation of wealth isn’t a president’s only goal; “economic security has to be the president’s goal.”

Going through figures of jobs lost due to Bain, Sharpton made his case, immediately clashing with Steele. Romney said he was a job creator, so “we have the obligation to see if that is the case,” Sharpton said. Steele countered that those numbers were some of the facts, not all of them — that in 78 percent of Bain’s deals, “jobs were kept and expanded and those businesses survived.” Pointing to the Obama ad that brought more spotlight to the issue, Steele argued that Romney wasn’t with Bain when the firm dealt with the company in the ad.

From there, Steele got much more heated, as Sharpton interjected asking Steele not to change the premise. It’s not about Bain’s success he said, but whether jobs were created. Visibly frustrated, Steele said the companies that did survive must have created jobs years down the line — but Sharpton said Steele doesn’t know that for a fact.

Rendell chimed in, asking if we know the net job creation numbers, adding that the Romney campaign claimed a smaller number when running in Massachusetts. Steele said there’s no obligation for the campaign to put out all of Bain’s deals with job information. Citing three or four companies to counter the Obama campaign is sufficient, he said.

Pivoting to Obama, Steele said we still have 23 million unemployed, and “about 3.5 million lost their jobs in his tenure.” So, he asked, does that mean Obama’s “a job destroyer?” He told Sharpton, “You want to play with the facts? Let’s play with the facts.”

That percentage of companies may have survived, Rendell said, but we don’t know if that created jobs. Steele then succinctly stated what he feels the “core of this debate”: investing in the private sector versus in the government. That, he said, is where Obama and Romney differ in their approaches.

Toward the end of the segment, Sharpton incredulously brought up Booker. “Do you know what you’re the mayor of, Cory?” he asked, noting Newark’s unemployment. “Cory, come on!” Steele added, “Cory, you go boy! You got it!”