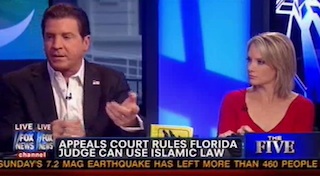 In Florida this week, an appeals court decided to deny a petition that would have stopped Judge Richard Nielsen from using Sharia Law to help decide a dispute between former and current trustees at a local mosque. On, The Five this afternoon, this resulted in an interesting debate over whether or not any religious law or teachings should ever be used in a court case and, if so, should one religion be held above each other.

There was also a lot of less interesting talk about people getting their hands chopped off because, well, duh.

The segment skimmed over a few fairly key elements of the case (including the fact that Nielsen is a Republican judge and that the petition to stop the use was filed by the mosque members themselves) but the St. Petersburg Times has a run down of the facts.

“The petition, filed by the Islamic Education Center of Tampa, contested a March ruling by Nielsen announcing his intent to use ‘ecclesiastical Islamic law’ in the case.

Nielsen limited his use of Islamic law to deciding whether arbitration by an Islamic scholar mediating a dispute between the mosque and ousted trustees followed the teachings of the Koran.

The arbitration itself is in dispute, with mosque officials saying it never took place.”

Over on The Five, Bob Beckel was quick to argue that this is not out of the ordinary in cases involving people inside a religious organization, pointing out that more than 20 cases have used Jewish Talmudic law. Beckel repeatedly tried to get his co-hosts to say whether or not they saw any difference between that and what’s being used here. Meanwhile, Dana Perino argued why this would be ok but people have such a problem with Christian symbols in courthouses.

However, since this is a conversation about…boo!…Sharia Law, someone had to get hyperbolic. That fell to Eric Bolling and Kimberly Guilfoyle who went straight to the heart (or wrist) of the matter.

“What about, if this sets precedent, is there not going to be a day where a judge says, ‘By the way, under Sharia Law, you stole that thing over there, we need to cut your left hand off.'”

Oh, limb severing. Is there no conversation you can’t enliven?