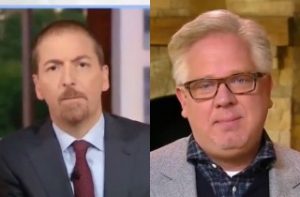 The man who once called President Obama “racist” has undergone quite a conversion in the Age of Donald Trump.

Chuck Todd spoke with Glenn Beck today about what it felt like for him and other anti-Trump conservatives to feel increasingly disconnected from their political fields, and America in general. Beck said that the biggest problem facing America is that no one wants to engage in political discourse anymore, and that people would prefer to shout at each other instead of listening or inviting others into their way of thinking.

Beck also found it interesting that he actually found himself in a rare point of agreement with Todd’s previous guest, liberal filmmaker Michael Moore.

“It’s interesting that you would have Michael Moore and me both on the same show talking about this because I think there’s a lot of people that would claim that Michael Moore and Glenn Beck are responsible for a lot of this. I can’t speak for Michael because I honestly don’t watch much of what he does, and I’m sure he doesn’t with me, but I warned about this.”

Todd eventually asked about what America’s 45th president could do to heal the country after how many divisions have been created from the intense rhetoric of the election. Beck opined that the key was for both sides to stop the aggressive pursuit of political victory, and turn toward widespread movements of reconciliation.

Beck concluded by wondering “how high of a price are we willing to pay” before community leaders take charge and begin the healing process on their own.

Watch above, via NBC’s Meet the Press.