After Strong Showing In Iowa, Why Is Ron Paul Still Getting The Media Cold Shoulder? 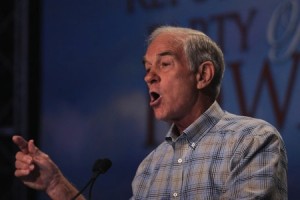 While Michele Bachmann claimed victory in the Iowa straw poll, Congressman Ron Paul came very close. The Texas congressman has attracted many passionate supporters, and yesterday an Associated Press article said he went from being a fringe candidate to “shaping the 2012 race.”

However, he has not exactly been a favorite of the mainstream media’s. Bachmann, the gold medalist of Iowa, was interviewed on every single Sunday morning news program, while Tim Pawlenty, the bronze medalist, got his fair share of media attention by announcing his withdrawl from the race the same day. Rick Perry got a decent amount of headlines for getting in the race, but his fellow Texan has not gotten the same in kind. The Examiner’s Timothy Carney puts it in perspective:

With Tim Pawlenty out of the race, only two active Presidential candidates scored more than 10 percent in Saturday’s Iowa straw poll. Following the media coverage Sunday, you would never guess Congressman Ron Paul was one of them.

On Sunday, Paul garnered less than half of the media coverage given to Governor Perry, and roughly half of the coverage Pawlenty got on the day he dropped out. Obviously, one of the factors to be considered here is the considerable amount of news made by both men, but why is Ron Paul still being ignored by the media at large?

Yesterday on CNN’s Reliable Sources, Roger Simon of Politico gave a fairly candid take on how Paul is being treated by the mainstream media.

“The media doesn’t believe Ron Paul has a hoot in hell’s chance of winning the Iowa caucuses, winning the Republican nomination, or winning the presidency, so we’re gonna ignore him.

I asked Paul Monday if the media blackout disturbed him.

“It did disturb me, but it was not a total surprise,” he replied. “The result at Ames was significant; it might well have propelled us to the top tier. The media cannot change that.”

Though the media can, of course, change that since we get to determine who the top tier is.

“It is hard for them to accept,” Paul said of his showing at Ames. “I had one interview scheduled for this morning, a national program, but they canceled. It is shocking to be told nobody wants you.”

Was this because technically Paul came in second and not first? I don’t think so. Four years ago, Mike Huckabee came in a bad second to Romney, losing by 13.4 percentage points. Huckabee managed to spin that into a victory at Ames and became a media darling.

But Paul almost wins the thing and he remains poison.

Paul has done his best to hit the frontrunner candidates for their respective weaknesses. He took issue with Mitt Romney‘s statement that “corporations are people,” and went after Rick Perry for being part of the status quo and suggested his entry into the race could dilute the establishment vote.

Michele Bachmann won the Iowa straw poll, she gets on all five morning shows. Ron Paul comes in second? Zilch. Not even a consolation prize. Damn, it is hard out there for a firebrand libertarian!