AG Eric Holder Chews Out GOP Rep: ‘Maybe This Is The Way You Do Things In Idaho Or Wherever You’re From’
video

AG Eric Holder Chews Out GOP Rep: ‘Maybe This Is The Way You Do Things In Idaho Or Wherever You’re From’ 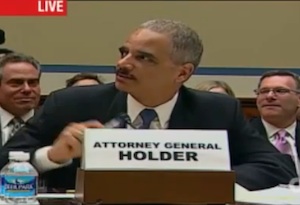 During a hearing Thursday over the Fast and Furious scandal, Attorney General Eric Holder lit into GOP Congressman Raul Labrador, after he displayed slides depicting statements Holder made about President Bill Clinton’s pardon of Marc Rich.

“That was among the worst things I’ve ever seen in Congress” Holder scolded. “There’s a whole bunch of things that I could say about what you just did, maybe this is the way you do things in Idaho or wherever you’re from, but understand something — I‘m proud of the work that I’ve done as attorney general of the United States, and looked at fairly, I think that I’ve done a pretty good job.”

RELATED: Sen. Jim DeMint: ‘I Think I Already Have’ Called For Holder’s Resignation

“Have I been perfect? No. Have I made mistakes? Yes,” Holder acknowledged. “Do I treat the members of this committee with respect? I always hope that I do. And what you have just done is if nothing else, disrespectful. And if you don‘t like me that’s one thing. You should respect the fact that I hold an office that is deserving of respect.”

“And you know, maybe you’re new to this committee, I don’t know, I don‘t know how long you’ve been here,” Holder continued. “But my hope would be that we can get beyond that kind of interaction, that kind of treatment of a witness whether it’s me or somebody else because I think what you just did was fundamentally unfair, just not right,”

Watch Holder’s comments below via CNN: