Age of Accountability: Cameras, Twitter and Texts Making ‘Getting Away With It’ Impossible

Age of Accountability: Cameras, Twitter and Texts Making ‘Getting Away With It’ Impossible 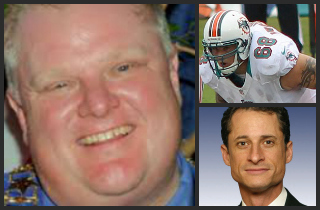 Look at the somehow-still Mayor of Toronto in the news this week, for example. If the great Chris Farley was still alive and needed a stunt double, Mayor Rob Ford would be your undisputed #1 choice. Forget the fact he smoked crack cocaine, which apparently isn’t addictive according to Farley/Ford. Instead, just look at how he earned a reputation of being a party animal in the first place: A YouTube video that shows a clearly over-served Ford—slurring, stumbling—just wandering the streets of Toronto looking for someone to talk to. On cue, a video–which appears to also be from a camera phone–surfaced today of Ford ranting and raving that he’s a “sick motherf***er” while threatening to kill someone.

Yup… this guy still has a job.

Five years ago, this likely becomes the stuff of urban legend. But in 2013, since practically every phone has a camera now, said videos of Ford eventually get posted…and you know what they say about putting toothpaste back in the tube.

Okay, so public figures should just keep this sort of stuff private, right? Perhaps using an anonymous Twitter handle would do the trick instead. But upon further review, it appears the handle of Carlos Danger has somehow been taken by a guy named Weiner who New Yorkers were actually seriously considering voting for as their next Mayor until the legend of Danger–and the electronic trail left behind–did him in.

How about athletes like the All-American Brett Favre? All he did back in 2008–while active as a player–was send photos via text message of his not-so-impressive-private-parts to a Jets female reporter. Guess Favre figured that he wasn’t worth enough money (earning over $100 million throughout his career) to ever to ever be exploited.

Then there’s Richie Incognito, who is anything but incognito at 300+ pounds. If Farley had a younger brother, this would be your guy. The Dolphins lineman apparently figured that leaving racially-tinged voicemails and text messages wouldn’t actually have any chance of being used as evidence of bullying in the event his target (fellow lineman Jonathan Martin) was pushed too far to go public.

Except…all of those texts and voicemails are in the hands of the league, who will decide his fate.

This sort of behavior isn’t just relegated to the general public…it’s practically the new normal in the media. Need proof? Look no further than NBC’s Chuck Todd, who mocked CNN on Tuesday night for being too slow when it comes to breaking news. Todd apparently failed to learn from his very public boo-boo last month of Tweeting out the wrong identity of the Navy Yard shooter in DC in an effort to be first instead of accurate.

In Todd we trust? Not quite.

Tweeting first and verifying later is becoming a big problem in media across all fronts. It’s to the point where two editors are needed: One for standard publications, the other for rogue reporters without a filter on Twitter.

And then there’s this guy: A Twitter fan with the handle Afroduck, who posted a video of himself going on a blistering 26-mile joyride around Manhattan. The video shows he was able to make the trek in 24 minutes, an unofficial record he claims he set in the first place. Afroduck proceeded to taunt police online that he couldn’t be apprehended.

“You can’t tell identify who I am just by looking at a video.” boasted Afroduck.

Nope…just a reckless Tweeter just begging the cops to arrest him, which they did after using, yup, video from street cameras to trace his license plate back to him.

Result: His 2006 BMW Z4 was impounded. Police also say Adam Tang (Afroduck) has a Canadian driver’s license, which was revoked by a judge.

A man named Gump once said, “Stupid is as stupid does.”