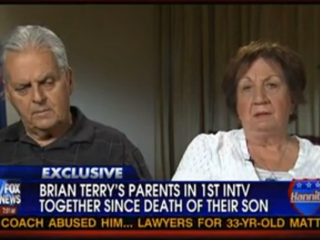 In what will go down as one of the most emotionally jarring interviews in the history of his program, Sean Hannity had the unenviable task tonight of talking to the parents of slain Border Patrol Agent Brian Terry, the man whose passing came as a result of the botched Fast & Furious operation in which someone in the Obama administration approved selling arms to Mexican drug lords. The pained, defiant parents asked for the President to enlighten the situation, but appeared to have no hope of resolution “until after the election.”

While Terry’s parents have been publicly vocal about wanting their son’s death investigated, this was their first interview on cable news about the matter, and appeared both clearly outraged and pained about the matter. When asked if he had anything to say to Attorney General Eric Holder or the President, the elder Terry said “I can’t say on camera, what I’d want to say to him,” while his wife asserted that she believed there was “something they don’t want us to know, something they’re hiding.” “They are hiding it big time, passing the buck,” he agreed.

To give the audience an idea of the President’s response thus far to the story, Hannity then played an interview the President had with Univisión’s Jorge Ramos where he says he does not know who authorized the operation, but he knew it was not himself or Holder. “You get tired of hearing the constant lies you know they are doing,” Mrs. Terry responded, to which Hannity added that White House Press Secretary Jay Carney had called the story a “fishing expedition in an election year” for Republicans. “They want to put Fast and Furious on the backburner until this election is over,” Mrs. Terry concluded. “It’s in the way.”