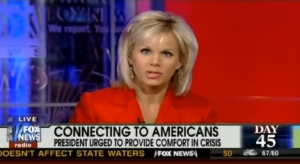 This morning, Fox & Friends gave an interesting report on the amount of Obama supporters on the left who have been critical of the president for not showing enough emotion in the handling of the Gulf Oil Spill. They listed criticism from key Obamaites like Maureen Dowd and Spike Lee and mentioned Jon Stewart’s great take down from Tuesday night. Then, finally, after discussing all these great critiques from people on the left, it was time for the Fox & Friends gang to get their licks in. Gretchen Carlson stepped up to the plate, pointed to the bleachers, swung, and…accused Obama of wearing “fancy pants and a fancy shirt.” Uh huh.

“Also, did you see, President Obama is being criticized for what he had on. When he was standing at the shoreline there, he had on fancy pants and a fancy shirt. Look, what other critics are saying, is that 80% of public perception is image. Not what you say. And he should have had on, like what Thad Allen has on next to him. Something that looked like he was a little bit more at the scene.”

Obviously Carlson is repeating what others have said, but she makes it clear that it’s something she agrees with. I just wish she could have pulled something a tad more substantial out of the bag. Strangely enough, it reminds me of a scene in The Dark Knight (stay with me) where the Joker compares himself to a dog chasing a car, he wouldn’t know what to do with it if he actually caught it. Carlson has been doing just fine insinuating that Obama is a secret Muslim, or Communist, or Baby-Eating Martian, but when she actually has something that even the left is criticizing Obama for, she really doesn’t know what to say.

Come on, Fox & Friends, this is your chance to shine! Make those shots count. Leave the sartorial critiques to the experts.