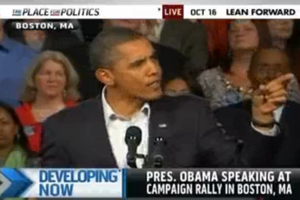 President Barack Obama was in Massachusetts today helping out Governor Deval Patrick‘s reelection effort. Speaking at a campaign rally earlier today, however, he was met with a bit of a road bump– hecklers who objected to the amount of AIDS research funding his administration has so far provided. To which an angry President Obama retorted: “look at what the Republican leadership has to say about AIDS funding.”

The President appeared uncharacteristically upset as, mid-sentence, a group of folks in the crowd began to loudly object to his speech as he described the work his administration had done for AIDS research. As the crowd turned their heads up to look at the hecklers, President Obama followed as well, and modified his speech for them, menacingly pointing his finger up at them as he warned that a Republican leadership would be extremely destructive to their cause. After raising his voice mid-sentence in response to them, President Obama continued: “One of the great things about being a Democrat is, we like arguing with each other. But to the folks concerned about AIDS funding, I would say ‘take a look at what the Republican leadership has to say about AIDS funding.'”

With the vocal discontent coming from the American right, it’s sometimes easy to forget that, for a large part of Progressive America– Boston being one of the flagship cities of the progressive movement– the Obama administration has turned out to be disappointingly conservative. This, coupled with the stress of the midterms, the falling poll numbers, and the added pressure of the very loud Tea Party movement seems to have gotten ahold of the President for at least a sentence or two today.

The chunk of the speech where crowd dissent is audible (via MSNBC) below: