Al Franken Urges Letterman to Run for Senate in Indiana 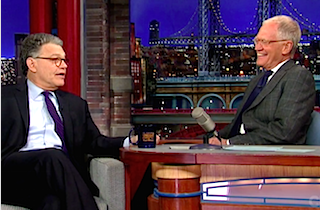 As David Letterman revealed on the Late Show Tuesday night, he is not happy about his home state of Indiana turning into a punchline over Gov. Mike Pence’s “religious freedom” law. “This is not the Indiana I remember as a kid,” he told his audience sincerely.

So, when he sat down to interview former Saturday Night Live writer turned Senator Al Franken (D-MN) last night, he asked him what he could do to help the situation.

“In 1964, we sort of settled the idea that you had to serve people,” Franken said, referring to the Civil Rights Act. He called for a national law that explicitly states businesses cannot discriminate against people based on their sexual orientation.

When Letterman asked what he, as a lover of Indiana, personally can do to “make the governor feel uncomfortable,” Franken had a suggestion. “As a matter of fact, there’s an open seat there,” he said, noting that Republican Sen. Dan Coats has said he will not run for re-election in 2016.

“Look, when people come to me, they say, young people say, ‘How do you become a United States senator?” Franken said. “And I say, ‘Well, do about 35-40 years of comedy and then run for the Senate.’ It’s worked every time.”

“I think you should run,” Franken told Letterman, solving that pesky question about what he will do after he steps down from the Late Show in May.