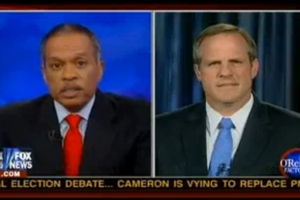 Tim James, the Alabama gubernatorial candidate turned America’s newest internet celebrity thanks to an explosive campaign ad declaring “this is Alabama; we speak English” made his primetime cable news debut on tonight’s O’Reilly Factor. Facing off against a combative Juan Williams, James insisted his ad had nothing to do with immigration and everything to do with “common sense.”

James, who– as Williams reminded him ad nauseum– is not doing so well in the polls, pointed out that his ad was filmed two months ago, only being released at the same time as the passage of the Arizona immigration law by accident. He defined his “brand” as “common sense,” and declared it a “roadway safety issue” rather than an immigration one. He also expressed support for all kinds of immigrants– from Ireland, Russia, Germany, etc. Williams defined his ad as “pandering” to xenophobia and possibly detrimental to the Alabama economy. James responded, in his colorful way, that Williams’ take was “the biggest argument I’ve never heard more nonsense in my life.”

James’ rise to the top of the news cycle is the product of a perfect media storm, and a testament to the times in which we live. His fame is exclusively due to a concerning (or funny, to the glass-half-full type of person) English-only advertisement that, merely months before, would have fallen under the radar. But thanks to its ability to perfectly capture the post-health care reform zeitgeist, it caught the eye of the satirists at Wonkette, who launched it into the mainstream media with Drudge-like speed.