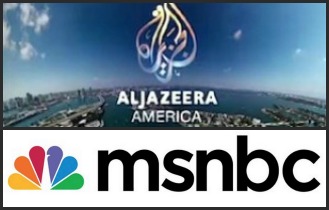 A prevailing narrative in cable news analysis has been the decline of MSNBC in the past year — especially as the network deals with an identity crisis in the face of two show cancellations and the realization that around-the-clock progressive commentary is not a recipe for success.

Last month, Ronan Farrow — the network’s outward attempt to court Millennial viewers — hit his lowest 25-54 demographic rating ever just one week before his and Joy Reid‘s shows were both nixed — moving newsman Thomas Roberts back into two daytime hours. Since then, MSNBC has openly touted its move towards hard news and some “changes in primetime” to help stave the decline.

But has it paid off so far?

Sure, it’s only been a month, but here’s one reason to think the situation is getting dire over at the peacock cable network: On Monday, March 30, MSNBC lost two daytime hours in the key 25-54 demographic to fledgling cable news network Al Jazeera America (AJAM).

What’s especially noteworthy about a network like AJAM beating out MSNBC for two hours is that, just 16 months ago, the Qatar-owned network was bringing in a zero demo rating during its primetime hours. And this comes as MSNBC supposedly focuses on reworking its network to compete with an overtaking CNN and an ever-dominant Fox News.