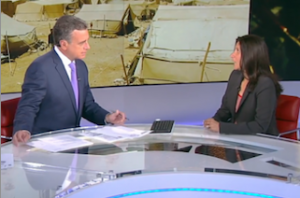 The Pew Research Center released a study Monday that examines how new cable news network Al Jazeera America’s Syria coverage stacked up against its more established rivals CNN, MSNBC, Fox News and BBC America. But despite promises that Al Jazeera America would provide a different kind of cable news, the study reveals that the way in which it covered Syria was not all that different from those other networks.

“Like CNN, MSNBC and Fox News, Al Jazeera America devoted the biggest chunk of Syria coverage to the debate over whether the U.S. should become militarily involved in the conflict that pits the government of Bashar al-Assad against an array of rebel forces. The most common message conveyed in Al Jazeera’s coverage-that the U.S. should get involved in the conflict-was also the No. 1 message on CNN, MSNBC and Fox News. BBC News America news programming, some of which originates in London, was more of an outlier in its coverage of Syria.”

In terms of the main focus of its content, Al Jazeera America’s coverage most closely resembled that of CNN’s, in that less than 50% of the Syria stories on each network concerned the debate over U.S. involvement. That is unlike the more outwardly partisan networks like MSNBC (62%) and Fox News (64%). 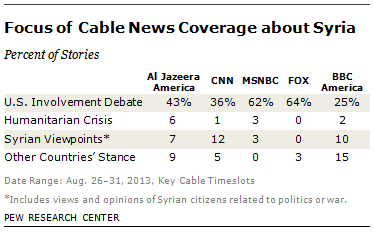 Similarly, Al Jazeera America featured segments arguing that the U.S. should get involved or should not get involved just as often as CNN did. If there was an outlier among the networks it was MSNBC, which was by far more likely to feature hosts and guests advocating for U.S. involvement, but also more likely than Al Jazeera America, CNN or Fox to argue that the U.S. should not get involved, that Iraq should make the U.S. “cautious” and that there are “no good options.” 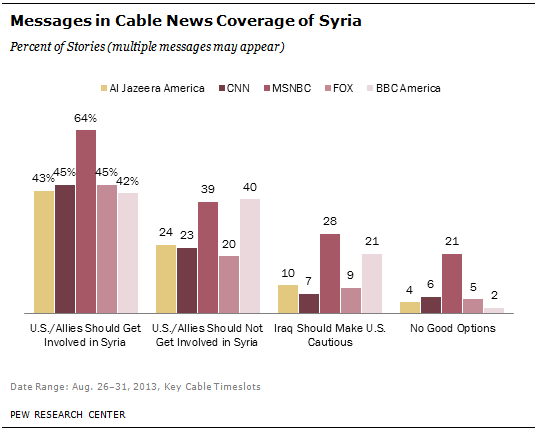 As for which network had the highest percentage of opinion segments on Syria, that honor went to Fox News, which was deemed to have 41% commentary/opinion vs. 59% reported news. CNN had the lowest level of opinion with just 14%. Of course, the study covered August 26-31, before the debut of the opinion-heavy Crossfire reboot. Al Jazeera America fell in the middle of the pack with 37% opinion and 63% hard news, nearly identical to MSNBC. 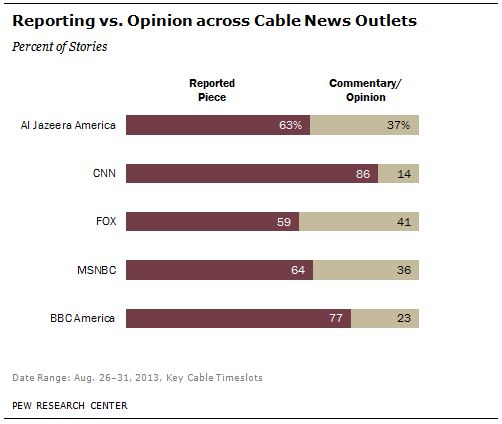 Al Jazeera America has tried to spin the survey in its favor, released a statement from network president Kate O’Brian that reads, in part:

“The Pew Research Center’s report on how Al Jazeera America and the other major cable television news channels have covered the Syria story over the past few weeks validates everything we have been saying about the high quality journalism Al Jazeera America provides to its viewers.

As the report indicates, Al Jazeera America’s coverage shows that is an American news channel that provides unbiased, fact-based reporting that doesn’t have a partisan or other point of view.”

Overall, the study demonstrated that Al Jazeera America may not be doing anything that different from the rest of cable news, but at the same time helped underscore the network’s aim of being a fundamentally American product. While some U.S. viewers may be looking to Al Jazeera America to offer an international perspective not often found on CNN, Fox and MSNBC, for now the network appears happy to broadcast news by and for Americans first.