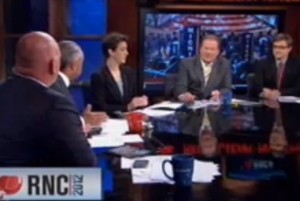 Legendary actor and director Clint Eastwood made political history Thursday night by completely overshadowing a major party’s presidential nominee with a comedy bit centered around an empty chair, and while the audience ate it up, MSNBC’s Rev. Al Sharpton and Ed Schultz were not amused. Rev. Al accused Eastwood of “belittling” President Obama by suggesting he would curse Mitt Romney, while Big Ed called Eastwood’s interview of the empty chair “demeaning.”

The audience was clearly anticipating the speech from the Man With No Name, but first, Clint Eastwood took the stage, self-assuredly winging it through a bizarre speech that included a conversation with an empty chair that was supposed to be President Obama. The result was a series of malformed riffs on the prison at Guantanamo Bay (“Well, why close that? We spent so much money on it…”), the Iraq War (“I know you were against the war in Iraq, and that’s okay…”), and the war in Afghanistan, which he seemed to take a shot at the Bush administration for. “We didn’t check with the Russians to see how they did there for the ten years. But we did it,” he said.

Whenever his train of thought seemed to wander a bit too far, Clint would turn to the empty chair as if the invisible President Obama was interrupting him. “What? What do you want me to tell Mr. Romney to do?” he said, awaiting the imaginary response. “I can’t tell him to do that. He can’t do that to himself,” he added, to uproarious laughter from the crowd. “You’re getting as bad as Biden.”

Convention anchor Rachel Maddow introduced Eastwood’s clip by calling it “the weirdest thing I’ve ever seen at a political convention in my life,” which is probably about accurate if you don’t count Zell Miller challenging Chris Matthews to a duel, which occurred off the convention stage in 2004. She went on to make the more practical criticism that the RNC unwisely bumped their own glowing Mitt Romney introductory video out of the three broadcast networks’ coverage in order to showcase Eastwood, a bad move even if he’d delivered a good speech.

Rev. Al offered that “everything we would like to give credit to Romney for, if we were to, about him saying let’s unite America and by, of him saying that we need to bring the country together, he had totally contradicted that by putting Eastwood on, who belittled the President by acting like he would swear in that way, it was belittling of the whole convention.”

“The symbolism is very strong and also very demeaning,” Schultz continued, “and tomorrow, around the water cooler, it’s about Clint eastwood, it’s not about Mitt Romney.”

“That’s the serious point for Republicans here,” said Republican strategist Steve Schmidt. “The first convention video not seen in primetime since 1984, a great video, that humanized him. All of the montages of the family videos not seen, and tomorrow morning, you had a brilliant, brilliant speech by Marco Rubio, I think one of the best articulations of a conservative vision, probably, since Reagan’s time for choosing speech, incredible speech. Mitt Romney did a fantastic job in the speech, and all that will be cut into in the coverage because of the sloppy Clint Eastwood decision.”

Up host Chris Hayes asked, “Can you explain, as someone who has been in this room, what was the conversation like? Did Clint Eastwood say, ‘I’m just going to go out and wing it,’ and everyone said…”

“Yeah, like we vetted the Rand Paul speech, but you can go ahead?” Maddow added.

“I don’t understand how that came about.” Hayes said.

“Somebody put the empty chair out there.” Schultz observed.

“That’s the $64,000 question,” Schmidt said. “I suspect we’ll find out before too long. Just incredibly irresponsible, and it’s really going to hurt Romney because it’s really going to cut into the coverage of, again, Marco Rubio’s brilliant speech and Mitt Romney’s very effective speech. Mitt Romney gave the speech of his life, and the fact that minutes will be taken away from the coverage of it tomorrow, not good.”

As a lifelong fan of Clint Eastwood, and someone who is familiar with his offbeat, hit-or-miss sense of humor (which relies more on the inherent humor in Clint Eastwood trying to be funny than on him actually being funny), I’m inclined to cut him some slack on the intent of the empty chair bit. In his own way, I believe Eastwood was trying to soften the partisan edge of the setting by being good-natured, but the bit, along with the audience’s enthusiastic jeering, did come off as ugly.

However, any anger that liberals feel towards Eastwood should be more than balanced out by the fact that the spectacle completely stomped all over Mitt Romney’s gauzy intro, and his speech. It made my day.

Here’s the segment, from MSNBC: