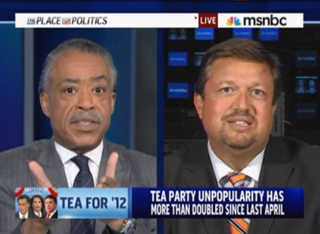 While his show may be the newest on MSNBC, Al Sharpton is already proving he isn’t afraid of booking guests that disagree with him. That led to fairly loud debate last night, where Dallas Tea Party leader Phillip Dennis fielded Sharpton’s outraged questions about his movement– questions that seemed to either undermine Mitt Romney or dismiss the whole movement– and was led to conclude Sharpton “fears” the Tea Party.

Sharpton began with a recap of points on the campaign trail that he considered proof Republicans were courting the Tea Party vote– even Mitt Romney, whose universal health care plan in Massachusetts is considered by many the frontrunner to Obamacare. “The guy who gave Massachusetts health care is embracing the Tea Party,” Sharpton lamented as his introduced Dennis. Dennis at first agreed with Sharpton that Romney’s appeal to the Tea Party felt disingenuous, as many of the issues important to the group– among them global warming and religion– fell outside of the realm of agreement with Romney. Dennis refused to say Romney was “lying,” but that he had an uphill battle with his group. He tried to explain it wasn’t about party as, “if Democrats decide to embrace religion and become fiscally sane,” he would vote for them.

With that in mind, Sharpton turned to attacks from Karl Rove, wondering whether “you worry about what you’re doing to the Republican Party.” Dennis went after Rove, calling him the “architect of Republican disaster,” and accused Sharpton and the Republicans of “fear[ing] the Tea Party, because you know we’re coming to change the game.”

That led to a contentious exchange between the two, where Sharpton hammered away at the point that “the American people have clearly said they have a different view of you,” while Dennis lost his earpiece (“I don’t think I could listen to any more of your insanity”). Sharpton kept attacking, however, claiming Dennis was “proud” to “protect billionaires and go after Grandma” and accusing him of “smirking” (Dennis did seem to be enjoying watching Sharpton go at it.”

Dennis shot back, however, arguing that Sharpton wanted “to turn America into Venezuela” and “reward the moochers of America,” arguing that the spending problem was much worse than the revenue. It led Sharpton to conclude with a bit of a cession: “I am afraid of you guys; I’m afraid you won’t hang around long enough till next year. Get your night’s rest, and do your exercise.”