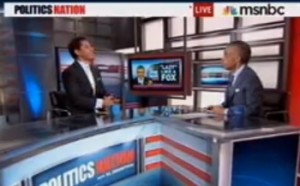 The big “news” in Vanity Fair‘s excerpt of an upcoming Roger Ailes biography seems to consist mainly of the shocking revelation that “Newt Gingrich is a prick.” On Wednesday night’s PoliticsNation, however, Rev. Al Sharpton and The Cycle host Touré highlighted Ailes’ remark that President Obama is “lazy,” and were, in my opinion, mighty charitable in doing so.

Rev. Al began the segment by setting up the passage from the Vanity Fair excerpt in which Ailes calls the President “lazy.”

“He’s one of the most powerful voices in the country,” Rev. Al said, “and he’s attacking President Obama. Quote, ‘Obama’s the one who never worked a day in his life. He never earned a penny that wasn’t public money. How often does he play basketball and golf? I wish I had that kind of time. He’s lazy, but the media won’t report that.’ That’s the president of Fox News calling the President of the United States lazy.”

The Rev then played some awesome prime cuts of racial tromboning from the likes of Mitt Romney* surrogate John Sununu, and an extended riff by Newt Gingrich that I had completely forgotten about. “I’m assuming there’s some rhythm to Barack Obama that the rest of us don’t understand,” Gingrich says. “Whether he needs large amounts of rest, whether he needs to go play basketball for a while.”

“This sort of ‘lazy’ term is something we heard flung at us as black people going back to slavery,” Touré said, “which, of course, you know, we perceive them as being guilty of not wanting to work. Of course they didn’t want to work. They were slaves.”

“But this is a revolutionary thing that they’re doing,” Touré continued, “saying ‘We’re going to get out of all of the work that we can,’ and then this stupid idea follows us since then. It’s this really disgusting, accessing stereotypes, red meat sort of dog whistle. On the Fox side of the aisle, they say yes, that’s right. This is what we think of black people already. And, on our side, we’re like ‘What are you talking about?”

Rev. Al and Touré also accused Ailes’ of blowing more than a “dog whistle,” but of making a comment that was just false. President Obama has been an attorney, a constitutional law professor, and a community organizer. Rev. Al noted a possible reason for obscuring those facts. “Another subtle thing is ‘lazy and never earned anything other than public money’, which is almost like welfare,” he said, before comparing the 84 days of vacation that President Obama has taken since assuming office, versus the 250 days George W. Bush took in the first three years of his presidency.

Rev. Al went on to note the restraint he felt he was showing. “And I’m being real nice about it,” he said. “I’m trying to not be like the big guy over at the echo chamber going crazy at the show.”

Sharpton stopped reading that excerpt before he got to Ailes’ tell: (emphasis mine)

“Obama’s the one who never worked a day in his life. He never earned a penny that wasn’t public money. How many fund-raisers does he attend every week? How often does he play basketball and golf? I wish I had that kind of time. He’s lazy, but the media won’t report that.” He noticed my arched eyebrows and added, “I didn’t come up with that. Obama said that, to Barbara Walters.”

What President Obama described to Barbara Walters, as author Zev Chafets described in the passage, was “that he feels a laziness in himself that he attributes to his laid-back upbringing in Hawaii.” He also told Walters that he made that critique despite “all the work I do.”

To Ailes, though, that bit of introspection is apparently a license to call the first black president lazy, which is fine, if you’re prepared to stand by that. Given the racist history of that particular stereotype, expressed with that specific word, you should be prepared to make your case that this guy really is lazy. Confronted with Chafets’ “Damn, that’s racist” arched eyebrows, Ailes ducks behind: “Hey, he said it.”

If this were truly a neutral observation about a truly lazy president, Ailes could have said “What? He is lazy, and here’s why.”

The real irony is that Ailes uses President Obama actually playing basketball as an example of “laziness,” while Chafets’ fawning excerpt opens with an extended anecdote about Ailes watching a basketball game, then taking a limo back to his office.