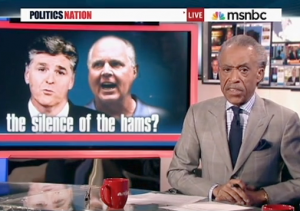 Al Sharpton reacted to news from late last night that a big radio broadcaster may be dropping Rush Limbaugh and Sean Hannity by touting it as a positive for President Obama‘s agenda. Sharpton used the segment mainly to reflect on some of Limbaugh and Hannity’s “greatest hits,” so to speak, while Sharpton was most interested to ask how this potential shake-up could affect Obama’s vision for the country.

Sharpton opened the segment by saying, “It’s the talk that pollutes the political conversation and undermines the president’s agenda, but the president might be closer to winning the fight for ideas in this country.” He reminded viewers of particularly controversial statements both conservative hosts have made, remarked how these kind of remarks have made their way into the halls of Congress, and asked, “What would a radio shake-up mean for the president’s vision?”

RELATED: Hannity Reacts To Cumulus Rumors: ‘There Are Forces At Work Here That I Will Explain In Due Course’

Joy Reid highlighted their advertising woes, likening Limbaugh’s older audience to the Republican base, and the fact that Limbaugh may have a reduced radio presence “says bad things about a Republican party that is more and more enthralled to him.” Sharpton kept pressing the point about Obama’s agenda, asking, “If they had a smaller audience reach, what will that mean for the bigger picture in policy?”

Media Matters founder David Brock took the news to say, “The lesson here is that hate has consequences.” He described the news as an “epic failure for Limbaugh” and “bad for the GOP,” while touting it as a “victory for progressives in the sense that it’s a victory for anyone who believes in civil discourse.” Reid reminded the others that Limbaugh et al. were not happy with how the GOP went soft in 2008, and their conservative vision played a bigger role in the 2012 election, but ended up “turning off women, young people, minorities… in droves.”

Brock concluded, “The head of the Republican party has just gotten his head chopped off.”