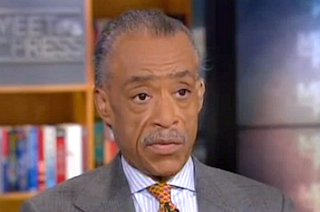 “Clearly there are grounds for a civil rights charges,” Sharpton told Gregory.

Sharpton, a key figure in metastasizing the shooting into a national issue in March of 2012, said he and Martin’s family had planned from the beginning to ask for a federal investigation if Zimmerman was let go.

“I watched the whole trial, and no one can say what Trayvon Martin did wrong,” Sharpton argued. “‘They always get away with it,’ the gentleman said. Who is they getting away with what? That’s the basis of a civil rights trial.”

“Was this not a fair trial?” Gregory asked.

“The trial happened,” Sharpton said. “The verdict came in. That does not exhaust the legal options of this family, and the bigger community issue of civil rights. We now have a position on the books in the state of Florida where an unarmed teenager who committed no crime can be killed and the killer can say self-defense. That is dangerous…I think every American ought to be afraid that my child can do nothing wrong and can be killed and you can use self-defense and tell four or five different stories that end up being inconsistent and still walk away.”

Gregory continued to press Sharpton over whether he believed Zimmerman got a fair hearing. “You disagree with the verdict, but you don’t question that it was a fair trial,” he said. “If you wanted him to have a day in court, that happened. That part of the process worked.”

“There could have been some things done differently at trial,” Sharpton admitted. “But the real object now is to move forward on dealing with the state law and civil rights.”

Sharpton referenced a march he and Martin Luther King Jr.’s grandson would be having in honor of the anniversary of Dr. King’s “I Have A Dream” speech. “How do we have this country deal with Dr. King’s dream fifty years later, and you can’t walk an innocent child through a neighborhood without the child being harmed, let alone killed?” Sharpton asked.

Watch the full segment below, via NBC News: