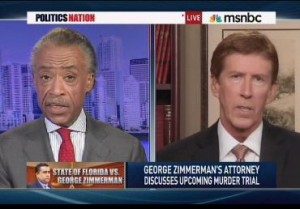 MSNBC host Al Sharpton today had an in-depth discussion with Mark O’Mara, the attorney representing George Zimmerman in the Trayvon Martin case. Considering Sharpton’s personal involvement in the case (which led to questions about his conflict of interest in covering it), the interview was relatively civil, and Sharpton found points of agreement with O’Mara. However, Sharpton did grill O’Mara on a few points that Zimmerman’s team has used to argue self-defense.

Sharpton asked O’Mara how Zimmerman can plead self-defense if, as heard in the 911 tape, he was actively pursuing Martin, contrary to the advice of the operator. O’Mara argued that there’s no conclusive evidence to suggest continued pursuit, nor is there evidence Zimmerman initiated any physical confrontation.

Sharpton played another 911 call with screaming in the background, saying that both a number of experts have said the voice belongs to Martin. O’Mara said he had assumed it would have been easy to determine who was screaming, claiming that there are experts who would disagree that the voice can easily be conclusively identified.

Sharpton brought up how Zimmerman was initially let go by the police on the night of Martin’s death, asking O’Mara if that was the right decision. O’Mara provided a few different legal perspectives for why it was and was not, ultimately saying the police need probable cause and to decide whether or not the shooting was justified. Sharpton shot back that it’s hard for the police to paint a fair picture when one of the two people involved is dead.

O’Mara also defended the release of unflattering photos of Martin in preparation for the upcoming trial, explaining that both sides give each other all this unfiltered material ahead of time in order to filter out what isn’t allowed in court and what will be permitted.

The conversation ended on a congenial note, with O’Mara agreeing with Sharpton that all decent Americans should denounce the “ugliness” surrounding the case. They agreed that the case needs to be fairly tried in the courtroom, and that people should respect the decision even if they disagree.

Watch the full interview below, courtesy of MSNBC: