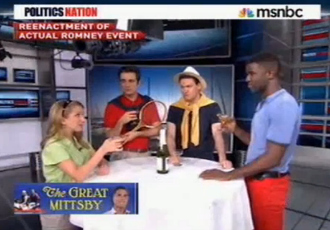 On Monday’s edition of MSNBC’s Politics Nation with Al Sharpton, the eponymous host made the case that this past weekend’s Mitt Romney fundraisers in the Hamptons were “life imitating art,” almost comically similar to the ostentatious wealth presented in F. Scott Fitzgerald‘s classic novel The Great Gatsby. To further illustrate his point, Sharpton brought on a troupe of actors to re-enact real quotes from the fundraiser, dressed in stereotypical rich people garb.

“The Romney event was so unbelievable that I brought in some of our friends… to do a re-enactment,” Sharpton said. “You’re going to hear things that they said at the fundraiser. These are real quotes,” he said over a disclaimer on-screen.

Capitalizing on the “life imitating art” theme, the four actors appeared on-screen, sitting around a table, wearing outfits clearly culled from of the book of “What Stereotypical Wealthy White People Wear At A Snooty Function”: The blonde-haired woman wore a pastel polo shirt; the men wore pastel colors and sweaters around their neck; one guy carried a squash racquet; and all spoke in a stereotypically Robin Leach-like voice.

“I don’t think the common person is getting it,” the sole female actress mimicked the woman infamously quoted in today’s Los Angeles Times. “We’ve got the message. But my college kid, the baby sitters, the nails ladies — all these people who have the right to vote — they don’t get what’s going on. I just feel if you’re lower income — one, you’re not as educated, two, they don’t get how it works.” The other three actors “mhmm”-ed and rolled their eyes at the mention of those “common people.”

“Common people don’t get it. Don’t understand how it works. Are you serious?” Sharpton asked of the actress playing the woman who said the offending remark.

“He is a socialist. His idea is find a problem that doesn’t exist and get government to intervene,” said the sweater-necked actor with a sun hat, accompanied by an exaggerated eye-roll from the other sweater-neck actor in addition to a loud, rich-people-like “Ugh!”

“A socialist. Really? So much for the people who got the message,” Sharpton said.

“Since when is trying to make the system more fair biting the hand that fed you? These guys can’t be serious,” Sharpton said of the actors who played the people who said things (not to each other) at a Romney campaign fundraiser.

“Did you see the wait out there? I mean, I kept asking is there a VIP entrance because, well, we are a VIP,” said the sweater-necked actor previously assigned to rolling his eyes and saying “ugh” a lot.

“You’re a VIP,” Sharpton mocked. “That means you don’t wait in line anywhere.”

“These are actual quotes from people at the Romney event,” Sharpton reiterated. “They are funding Mr. Romney’s campaign. They’re the same people who think common folk don’t get it. But it’s really them who don’t get it. Do we really want them calling the shots for this country?”

Check out this truly bizarre TV segment below, via MSNBC: