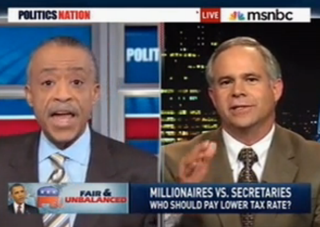 Mitt Romney‘s tax returns provided at least one commentator plenty of fodder to feed his theory that the tax rates are unfair in this country: Al Sharpton, who invited on his program today Tea Party Congressman Rep. Tim Huelskamp for a spirited debate on social justice. It was the sort of debate where short questions were thrown in each other’s general direction but went, as ships passing in the night, equally unanswered. The two main questions: from Rev. Sharpton: “Is it fair?” after a number of statistics on tax rates that Rep. Huelskamp labeled untruths; and from Rep. Huelskamp: “What’s your income?”

“Is it fair that millionaires pay a lower tax rate than their own secretaries?” was the first variation of Sharpton’s question, to which the Congressman replied that he had seen the State of the Union address and “what we heard last night was a campaign speech.” Sharpton called his reply “talking points” and asked the question again. “They actually don’t, according to the IRS,” Rep. Huelskamp replied. Asked again, with Sharpton citing a statistic that the average American taxpayer paid around 30%, the guest denied it, once again. Sharpton finally gave up trying to assert the statistics as true and simply asked, “if those statistics that I reported are true, is it fair?” “It’s not true.” This gridlock continued for a bit.

“What I’m trying to bring home to the American people is that you guys can’t discuss fairness,” Sharpton finally argued. Sharpton then turned to the Congressman’s district in Kansas, and noted that most people there make less in a year than Romney would make in a day, and insisted again that Romney paid less than average taxes. “He’s paying 14%. We’re not guessing– he released it,” Sharpton said of Romney, and Rep. Huelskamp responded that “fairness isn’t the end result, it’s the opportunity,” so what rich people pay in taxes should not particularly matter.

After Sharpton continued in this vein for some time, the Congressman turned and asked if he could interrupt to ask a question. “I’ve got to go,” Sharpton replied, while he replied “let’s not be envious.” The mischievous glint in Rep. Huelskamp’s eye preceded this question: “What is your income a year?” “I can tell you my tax rate is the same as the people,” Sharpton replied. “What’s your income, what do you make on this show?” And with that, the segment ended in fireworks.