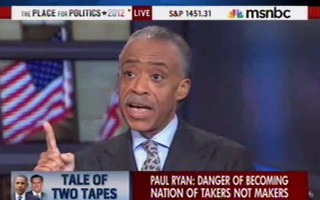 MSNBC host Al Sharpton appeared on MSNBC to weigh in on dueling tapes of presidential and vice presidential candidates dominating the headlines on Wednesday. The first, a tape of President Barack Obama as a candidate in 2007 speaking at Hamilton University where he hammers the federal governments’ response to Hurricane Katrina and alleges that this response was a symptom of the government having already surrendered New Orleans to poverty and racial discrimination. The second tape, released by the Huffington Post features GOP vice presidential nominee Paul Ryan saying that polls show that 70 percent of Americans still prefer a conservative vision for the country while 30 percent favor a “welfare state.”

RELATED: The Obama Tape Dud: Republicans Relitigate 2008 While Democrats And Voters Focus On 2012

MSNBC anchor Thomas Roberts played a portion of the clip of Obama from 2007 which broke on The Daily Caller website and aired on Fox News Channel’s Hannity on Tuesday. “Does this tape have any weight,” Roberts asked.

“He was an official candidate, the press was there, the speech was covered – including this station – and how does this become divisive in 12? It wasn’t divisive in 7,” said Sharpton.

He went on to say that the tape shows the president hammering the federal government’s response to Katrina is an opinion shared by many, as evidenced by opinion polls from the period.

“If this is the best they’ve got, then I think the president’s in great shape,” Sharpton concluded.

Roberts then played a clip of Ryan in which he says that a vast majority of voters still want the “American dream” while just 30 percent are inclined to vote for the “welfare state.” Roberts asked if it was damaging for the Romney/Ryan ticket for Ryan to demonstrate the “same mentality” that Romney displayed in a tape of him telling campaign donors that he will never have the support of the 47 percent of Americans who pay no income tax.

Sharpton replied that Ryan’s comments were “defining. “It shows that both the presidential and vice presidential candidates of the Republican party have the same attitude that there is a large block of Americans – one saying 47 the other saying 30 percent – that want to be welfare dependent or want a welfare state,” said Sharpton. “They want to be president and vice president. When they identify this large block of Americans that in effect they’re saying are moochers.”

Sharpton concluded that while Obama was questioning the Bush administration, Romney and Ryan are questioning “the American people.”