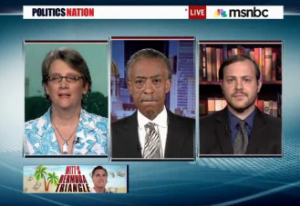 On his show Tuesday night, Al Sharpton tore into Mitt Romney for not knowing where his foreign money is exactly, refusing to buy the idea that Romney wasn’t trying to evade any American taxes. Calling the whole ordeal “confusing” and “weird,” Sharpton and his panel attempted to decipher the situation.

In a segment introduced by a clip of steel drums, Sharpton was quick to juxtapose stereotypically beautiful perceptions of Bermuda (the water, the sand, the music) with the deep, dark secrets about Romney’s money. “We don’t know what he is hiding,” Sharpton said, going on to note Romney’s own ignorance. “In fact, neither does he.” The host was pointing to Romney’s remarks in which he said he has nothing to hide and has paid all necessary taxes, but that he doesn’t know where the money is exactly because it’s managed by a blind trust.

“Isn’t it weird he doesn’t know about a company that he owns in in Bermuda?” Sharpton asked, noting that most people know where their money is. But the fact is that he does own a company in Bermuda, he said, asking, did you ever think we’d have a presidential candidate who OWNS A COMPANY IN BERMUDA?

He turned to Rebecca Wilkins for explanation, who said it’s not possible that Romney doesn’t know anything about the company because the whole thing was set up before it was transferred to the blind trust. Talking Points Memo’s Benjy Sarlin then weighed in on “just how blind this trust is,” adding that there have been many questions surrounding the issue, based on certain investments (like the one in his son Tagg’s startup). Not to mention, the person managing the trust is a longtime Romney adviser, as well as his personal attorney.

Wilkins said the only reason people go to such places to make their investments is to cheat on taxes. The larger part of the segment resulted in concluding there’s a “great deal of smoke and mirrors” surrounding the controversial topic — and that confusion seemed to be the only thing anyone could be sure of.