Al Sharpton Rips Gun Rights Advocate For Slavery Remark: You Do Realize MLK ‘Was Killed By A Gun’? 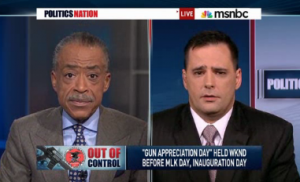 Larry Ward, the man behind “Gun Appreciation Day,” appeared on Al Sharpton‘s show on Monday — where Sharpton took the opportunity to criticize Ward’s recent controversial remarks. Ward said that had African-Americans had the right to bear arms, slavery may not be on a chapter in American history. Sharpton took that claim to task.

RELATED: ‘Gun Appreciation Day’ Leader To CNN: If Blacks Had Guns, They Never Would Have Been Slaves

“I think Martin Luther King, Jr. would agree with me if he were alive today that if African Americans had been given the right to keep and bear arms from day one of the country’s founding, perhaps slavery might not have been a chapter in our history,” Ward told CNN last week.

“Now, first of all, Larry, you do realize Martin Luther King was killed by a gun, and that he preached all of his life against the use of any weapons and preached turn the other cheek?” Sharpton asked. “So you do realize that what you said was the total antithesis to Dr. King?”

Ward said he stood by his statement, and as he went to note that King was denied a gun permit, Sharpton asked him not to “distort” facts and finish the story. King also said he was glad and would not carry a gun, Sharpton said. “I believe that Dr. King fought for equal opportunity,” Ward replied.

“The fact is that gun ownership is a civil right,” Ward argued. “And currently I believe that the civil right is not being equally treated amongst everyone in America.”