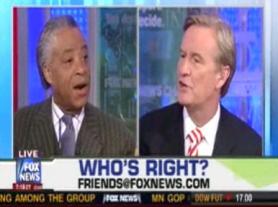 Al Sharpton is a fairly regular guest on Fox News, but we hear his appearance this morning on Fox & Friends was unplanned and unannounced.

But FNC cleared the rundown and made room for Sharpton on the curvy couch for a discussion about the NAACP, and yes, again, the New Black Panther Party.

“Is the NAACP saying that the Tea Party itself as a body is full of racists?” asked co-host Alyson Camerota. No. “They very clearly are saying elements at the Tea Party rallies have said or done or held signs that are racist,” said Sharpton.

Meanwhile Sharpton wants the Tea Party leadership (who would that even be?) to condemn the few racist signs that inevitably show up. And let’s not pretend they don’t exist. But Tea Party activists regularly hedge their argument about the lack of racism in the Tea Party by saying there is self-policing, that they, essentially, condemn the racist elements as they are occurring.

It sounds like there’s going to continue to be the stalemate between both sides – but that won’t stop the arguments like today’s on F&F: