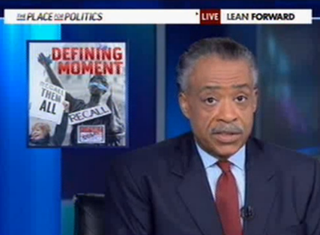 It was the perfect fledgling anchor moment: at some point earlier today, controversial MSNBC hire Al Sharpton tried to read an impassioned plea to protesters to “resist,” but his point was lost amidst the wrath of the teleprompter gods, snatching the words away. It was also a perfect moment for those arguing that that the Sharpton hire was at best unwise; at worst disrespectful and the product of quid pro quo.

Sharpton was covering the Wisconsin recall election fueled by a struggle between Gov. Scott Walker and the state’s labor unions, and was imploring union workers to resist the crackdown. What was meant to be a rousing battle cry came out something like this: “but resist we much… we must… and we will much… about… that… be committed.” It didn’t take long for the clip to appear on Breitbart.tv with the title “Greatest Al Sharpton Clip Ever” (we beg to differ) and make the rounds on the Twittersphere with a cornucopia of giggly commentary attached. And they do have a point– it’s a pretty funny clip, and not just for the reasons those who find Sharpton reprehensible would think so.

To conservatives’ credit, there is something hilarious beyond the schadenfreude about watching Sharpton, so rarely at a loss for words, tame his tongue for long enough to put together the sentence staring him in the face. The artificial nature of anchoring already adds a cartoonish element to whoever is at the desk; watching the attempted perfection of an anchor falter in such a human way– whether a mispronunciation such as here, or an “ad lib a tease” moment, or perhaps accidentally saying “blow job”— is comedy gold.

That said, this clip won’t be treated exclusively as a laughing matter because of the nature of Sharpton as anchor, and while that may be an exclusive trait to conservative circles so early in the meme’s distribution, this will likely become a bipartisan reaction. His detractors won’t see this as the sort of mistake even a veteran anchor can stumble onto once in a while, though veteran anchors often do. It will be reinterpreted as proof of what most already know– that Sharpton is an entertaining ideologue, but that considering him enough of a journalist to have his own afternoon news show is, to put it mildly, a bit of a stretch. Next time Sharpton makes a serious point that echos in the mediasphere, expect plenty of “he can’t even read a teleprompter” retorts.