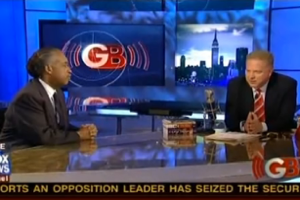 Where do you take a conversation when the only condition is that both parties disagree on everything and neither is open to persuasion? Most cable news conversations go something like this, with both sides just shout unintelligibly at each other until the commercial break. Glenn Beck and Al Sharpton decided to restrict the conversation to things they agree on: Martin Luther King, Jr. was good for America, people tend to have beliefs, and freedom of speech is a fundamental right.

The theme of Beck’s segment seemed to be “faith, hope, and charity”– the cornerstones of the 9/12 movement, and his mission to get Sharpton to agree that all of those values, however one defines them, is they key to restoring America. Sharpton was polite enough not to challenge the claim that America needed restoring, but found his hands tied when he tried to make any non-philosophical argument. When noting that he believed “some need more charity than others,” Beck was quick to return to the central theme that charity was, indeed, a positive value. To say it isn’t exactly Crossfire would be an understatement, though there is an awkward moment where Beck suggests Sharpton is Dr. King’s contemporary, when the former was 13 when King was murdered.

Peace and harmony with the most controversial figures of the left is not exactly what people tune into Beck to hear, but it’s precisely the kind of behavior that defies shallow claims on the left that Beck is a madman, a showman, and a partisan stooge. Glenn Beck the Media Matters villain isn’t supposed to be capable of polite conversation with Al Sharpton, though credit where credit is due: Al Sharpton the RedState villain isn’t supposed to be anywhere near Glenn Beck, either.

Watch Beck and Sharpton talk about faith, hope, and charity below: