Al Sharpton Talks With Rachel Jeantel’s Lawyer, Condemns ‘Offensive’ Stereotyping Of Her In The Media 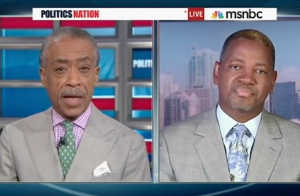 MSNBC’s Al Sharpton spoke today with Rod Vereen, the attorney representing Rachel Jeantel, a key witness for the state in the murder trial of George Zimmerman. Sharpton noted how the defense attorneys went out of their way to discredit her testimony, and brought up some of the vicious attacks on Jeantel during and following her two days in the courtroom. Immediately following the interview, Sharpton condemned the attacks on her that “have been nothing short of offensive to any American.”

Vereen explained that because Jeantel is still under subpoena, she cannot talk to anyone about her testimony, but said that “her body language tells me that she’s happy that it’s over with.” Sharpton brought up how the defense “tried to discredit Rachel” by grilling her about initially lying over why she didn’t attend Trayvon Martin‘s funeral. Sharpton found her explanation, that she felt guilty about being the last person who spoke to him before he died, “pretty reasonable to me.”

Vereen explained his client never wanted to be dragged into the spotlight over this, but now the credibility of a teenage girl has become the topic of national discussion. Sharpton asked Vereen if Jeantel is aware of the attacks on her in the media and online. Vereen said he recommended she avoid social media, because if she’s called back to testify, the negative criticism could influence her. He also slammed the media for nitpicking her “stumbling,” saying that witnesses will always have “inconsistencies in statements,” but that does not always mean they’re lying.

Sharpton concluded the segment with a swift condemnation of the attacks on Jeantel’s character.

“The attacks that I’ve heard on Rachel Jeantel have been nothing short of offensive to any American that wants to see young people… to do the right thing and come forward. No matter what happens in this trial, if people come forward, they ought not be ridiculed. They ought not be in any way given the kind of treatment that this young lady was given… To castigate her, to characterize her, to stereotype her, and use all kind of attacks, I think, is something that does an injustice to the criminal justice system.”