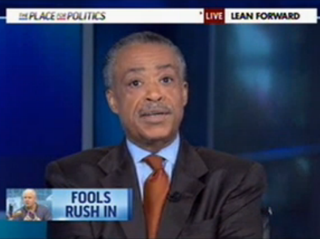 Al Sharpton isn’t one to keep quiet when under attack, and tonight he responded in kind to the near-universal conservative guffaw his “resist we much” teleprompter gaffe received last night. Specifically, he responded to Rush Limbaugh, who suggested jokingly that the teleprompter was “racist.” Taking full responsibility for garbling the words, he thanked Limbaugh for bringing him viewers, telling him, “I want to preach to your choir!”

Sharpton seemed in good spirits about the gaffe, clarifying that, unlike Limbaugh’s conspiracies, “there’s no racist teleprompter” and “there’s no black journalist trying to sabotage me– I messed up a line!” He took so much responsibility, noting that it happens to anyone who has ever hosted a show, “including you,” that he even gave away another gaffe he made tonight. “There is no ‘Environmental Projection Agency,'” he noted, requesting Limbaugh play that mistake, too. “Play that tomorrow, because I want all of your listeners to start watching me,” he argued. “I don’t want to preach to the choir– I want to preach to your choir, Rush!” He also addressed the “conspiracies” surrounding his hire: “I don’t deal with them because they make people watch.”

He did deal with one of them, however: “one guy said the only reason I’m here is because of my name recognition. How did I get my name recognition?” He reminded the audience that exactly a decade ago, he was serving jail time for protesting military activities on the Puerto Rican island of Vieques and had spent his life protesting– “I paid the dues to get my name recognition.” While he didn’t directly address one of the major complaints against him– that he is not a journalist by trade– he did address why he was given the program, and so indirectly answered the question without giving it airtime. “I get the message through,” he argued, even when he “sometimes garbled the words.” He then turned back to Limbaugh, and requested he “keep taking the bait– a fish wouldn’t get caught if they kept their mouth shut.”