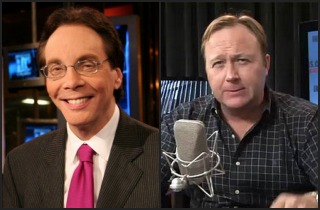 Stop the presses: Alex Jones got through a slightly contentious interview without shouting at all.

The famed conspiracy theorist dropped by Alan Colmes‘ Fox News radio show Thursday evening and talked about his ABC appearance that never was, along with a handful of other subjects including the paranoia surrounding the Jade Helm military operations in Texas.

First, regarding his non-appearance on this past Sunday’s ABC This Week: “I wish I would have been there,” he told Colmes. “They never completed setting up the interview. The first said it was going to be live, and promised, so I couldn’t be edited. Then they said no it’s not live. Then they kept changing the time and I didn’t hear from them for a day, so it didn’t happen. Then 12 minutes before airtime they call me to tell me there is a car waiting outside for you. Well, I was literally in a robe cooking my kids breakfast, so I didn’t go.”

Well, that’s an image for you to enjoy.

At another point in the conversation, Colmes tried to grill the famously blustery Jones. “Some of the stuff you say and do instills such fear in people,” he said before praising the InfoWars host’s radio success, and then asking: “But you scare people! Don’t you?”

Jones responded, without raising his voice (what?!?!): “I think we have a problem of not being concerned enough about serious problems in our society. We have a bit of a normalcy bias, Alan, and so I think it’s good I’m personally concerned, and so, yes, I think some of that fear telegraphs through.”

You can listen to the full 30-minute conversation below, but some highlights: Jones continued to insist that the Jade Helm operations are the prelude to “martial law”; blamed the Amtrak disaster on major auto corporations clamping down on “train culture” so much that infrastructure has gone neglected; called former Libertarian Party presidential candidate Gary Johnson “Asperger-ish” in his inability to get publicly excited; and asserted that, aside from Rand Paul, he would actually consider voting for Elizabeth Warren or Bernie Sanders, even though he disagrees with them on many issues.