Alan Colmes On Rep. Weiner: ‘I Think It’s A Shame That He Has To Step Down’ 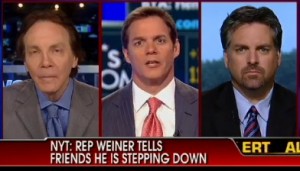 Liberal commentator Alan Colmes debated conservative commentator Steve Hayes on Fox News today, but it was host Bill Hemmer who ended up raising his voice at Colmes. Colmes declared “I think it’s a shame that [Anthony Weiner] has to step down or feels he must step down.” Before Colmes continued to rail against Republicans for being hypocritical, Hemmer demanded Colmes explain why exactly Weiner’s forthcoming resignation is a “shame.”

“Unless we find out that he broke the law . . . that’s a different story. . . . I think it’s a shame that a personal situation like this should result in him having to leave his job. . . . I’m not condoning his behavior . . . this has nothing to do with whether or not he’s a good congressman. I want someone in office, not to be my moral guide, but I want someone who is going to vote the way I want them to vote.”

Hemmer was shocked that Colmes thought Weiner’s behavior was not a huge offense, and Hayes doubted Colmes would be singing the same tune if this scandal involved a Republican. Colmes forcefully declared it wouldn’t matter what Weiner’s political affiliation was and yelled “call me a liar,” if they didn’t believe he would say the same thing about a Republican. The fiery and enjoyable discussion demonstrated that the Weiner story stirs up passionate responses in everyone, as even Hemmer found it hard to let Colmes’ statements go completely unchallenged.