Alan Colmes Tells Bill O’Reilly: “Everything Is The ‘Far Left’ To You” 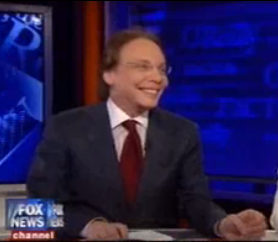 Every Tuesday night on The O’Reilly Factor, political commentators Alan Colmes and Monica Crowley debate one another in an always entertaining “Barack and a Hard Place” segment. Given that the two are related (Colmes is married to Crowley’s sister) and both can play along with host Bill O’Reilly, this segment often seems like a fun family dinner where the participants don’t have to hold back and can say absolutely anything they want, because when the gloves come off, they all really like each other. How else to explain the fact that O’Reilly calling Colmes a “loon,” Colmes saying Crowley is “nuts,” O’Reilly telling Colmes “you and your crew are done” and other insults flying back and forth can all be exchanged with laughter throughout?

This week, O’Reilly disagreed with Robert Gibbs about the healthcare ruling and, when combined with the general unpopularity of healthcare reform, declared “I don’t think [Obamacare] has a future in America.” Colmes suggested O’Reilly not jump to conclusions and also realize that much opposition to Obamacare comes from progressives who think the reform did not go far enough. This suggestion set O’Reilly off and he asked Colmes why he hasn’t realized Obama threw him and the other “loons” under the bus, which prompted the following exchange:

During the very funny shouting, O’Reilly does admit he thinks a center to the Democratic party exists and disputes Colmes assertion that he never says “far right.” Finally, Crowley has to interject and say “hello, I think I’m still on this show.” Colmes often does not get enough credit for being a legitimate liberal, but his immediate and humorous reactions to Crowley’s consistent references to Obama as a “radical leftist” and his willingness to repeatedly take on O’Reilly should earn him some much deserved liberal credibility.