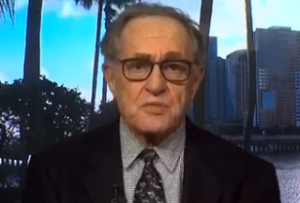 Christmas is supposed to be a time of putting aside differences and brotherhood and such, but clearly no one told Alan Dershowitz, because during an appearance on CNN yesterday, he went after journalist Glenn Greenwald for his work on the NSA leaks and accused him of being an anti-American ideologue who would never badmouth terrorist regimes.

Dershowitz popped up on-air right after Dana Bash spoke with Greenwald himself, and Dershowitz wasted no time in going after both Greenwald and Snowden. He insisted that Snowden had other options aside from just going public, in spite of the national security apparatus that might not have been much more helpful, like revealing it to “the proper authorities” (i.e. the House and Senate intelligence committees).

RELATED: Alan Dershowitz Trashes Greenwald On Piers: ‘Loves Tyrannical Regimes’ & ‘Did This Because He Hates America’

And as for Greenwald, Dershowitz was a lot more forthcoming about what he thinks of the journalist behind a lot of the important reports on NSA surveillance.

“He’s an ideologue. I don’t think he would have revealed this information if it had been critical of Venezuela or Cuba or the Palestinian authority. You know, he doesn’t like America, he doesn’t like Western democracy, he’s never met a terrorist he didn’t like, so he’s a very far-left ideologue that uses this to service his political agenda, not simply to reveal information in a neutral way.”

Greenwald didn’t get the chance to respond on-air, but he did take to Twitter for a comment or two. 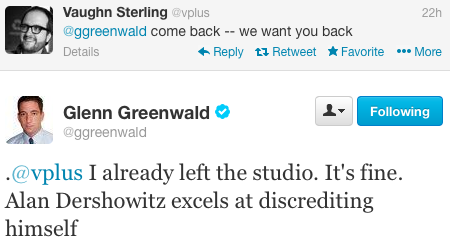