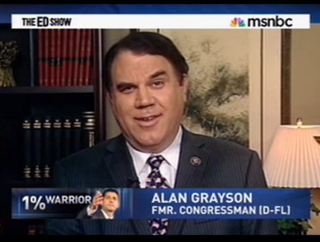 The rise of Occupy Wall Street and the topic of income inequality in the media has giving a bit of a second wind to the currently stalled career of former Congressman Alan Grayson, and he has returned to the spotlight with gusto. The Congressman visited the Ed Show to give his take on how much he opposes divisive politics, and in doing so compared the complaints of such division from Rep. Paul Ryan to OJ Simpson pretending someone else was responsible for the murders he was accused of.

Talking to host Ed Schultz, Grayson responded to comments by Rep. Ryan that the President was encouraging divisiveness in politics. “For Paul Ryan or any Republican to talk about the President inciting the politics of division is much like OJ Simpson saying he’s going to devote his life to finding the real killer– they’re the real killers!” he exclaimed. He then cited several examples of what he thought was partisan politics at play, from Nixon’s “Southern Strategy” to an insistence, he claimed, of dividing Americans along cultural lines. “Give me a break,” he concluded.

Schultz then turned to comments by Elizabeth Warren, Massachusetts Senate candidate for the Democratic Party, that no one in capitalism gets rich without the government. Rep. Ryan considered the comments extreme and, of course, Grayson found his response silly. To Grayson, it ignored “a tremendous growth in the wealth of the wealthy and the poverty of the poor” which was the problem the Occupy Wall Street movement seemed most concerned by. This meant a choice between “class warfare and class surrender,” of which Grayson chose the former.