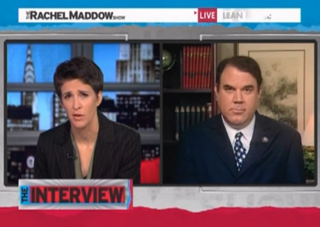 While the Occupy Wall Street movement continues leaderless and clearly with little working in the PR department, former Democratic Congressman Alan Grayson has taken on part of the burden of explaining and defending the movement in public. Having received a standing ovation on Real Time with Bill Maher Friday night, Grayson appeared on MSNBC tonight with Rachel Maddow, arguing that Occupy Wall Street was the logical conclusion to the stagnating economy.

Having introduced the segment with much criticism from the right for the movement, Maddow asked Grayson to respond to much of it, including comments from Glenn Beck that the protesters would “drag us out and kill us” if they could. “I think Glenn Beck is right; it’s only a matter of time before they take him away,” Grayson joked, but kept most of the appearance more somber than his usual fare. Citing Wikipedia to explain “there are only five countries more economically unequal than the United States,” he argued that the problem the protesters faced was that they did see solutions on either side, though particularly among the Republicans.

“Herman Cain’s solution is ‘get a job,'” he noted, but with 24 million people out of a job, it wasn’t so easy. “What people want is solutions to their problems, and what is either side offering?” With that in mind, and with no other response, Grayson argued, “they’re doing the one last human thing left: they’re going somewhere.”