Alan Grayson Jokes To Ed Schultz: Bush ‘Might’ve Been Passed Out Drunk For The Last 3 Or 4 Days’ 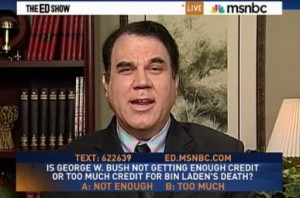 In the wake of the Osama bin Laden killing, there has been some ugly debate over credit for vanquishing the terrorist leader, which has, in turn, revived some bitter Bush-era battles. On Thursday night’s The Ed Show, host Ed Schultz ran down a list of reasons not to credit the Bush administration for bin Laden’s killing, followed up by a visit from former Rep. Alan Grayson, who theorized that Bush declined to attend Thursday’s ceremony at Ground Zero because “I suspect that President Bush might’ve been passed out drunk for the last three or four days.”

Grayson hit the ground running with his own list of Bush transgressions, before Schultz asked him if he thought Bush had stayed away from Ground Zero “because of credit,” and Grayson deployed his zinger:

Grayson was responding to a New York Daily News report that said, quoting an unnamed “highly placed source,” that Bush “felt his administration wasn’t getting enough credit for the decade-long hunt for Bin Laden.”

The attribution on this story is beyond weak (a “highly-placed source” could be Cheech and/or Chong), and by all accounts, the former President has handled the bin Laden killing with grace and humility. While others seem eager to re-litigate things like waterboarding and pre-Iraq War intelligence, Bush has been doing the right thing. Repeating this poorly-sourced report seems misplaced and unfair.

Grayson’s personal attack about Bush’s drinking problem is not a new thing, but given how deferential Bush has been, it came off as exceedingly dickish. I’ve never understood this line of attack in the first place. Most people, regardless of politics, have loved ones who have struggled with alcohol or substance abuse. Bush’s decision to abstain is admirable, and whatever his personal struggles with the issue, most people can relate to that.

There are important questions raised by the bin Laden killing, and as unseemly as squabbling over credit seems, it has important implications to future policies. As such, there’s nothing wrong with making your case, based on the facts (some more compelling than others), the way Schultz did earlier in the segment. While many commentators with no ax to grind have been willing to grant Bush a measure of credit, it is fair to ask if the cost of his detour into Iraq wipes out that credit, or if he deserves credit simply for doing his job. Do you pat your auto mechanic on the head just because he managed to pop the hood?

Either way, Grayson should have stuck to the facts, if for no other reason than that nastiness like this only serves to undercut whatever legitimate point you may have.

Here’s the full segment, from MSNBC: