Alan Grayson: ‘Not Even Clear That It Was A Chemical Attack’ In Syria 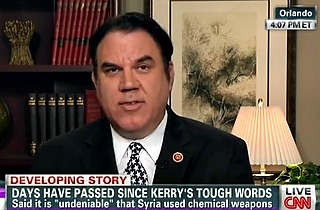 “I think the administration is giving only one side of the story,” Rep. Alan Grayson (D-FL) told CNN’s The Lead guest host John Berman on Thursday. Grayson told Berman that he opposes intervention in Syria because U.N. inspectors have not definitively concluded that either a chemical attack took place in Syria or that such an attack was ordered by Bashar al-Assad’s regime.

“I don’t see how this tragedy – and, yes, it’s a tragedy – affects U.S. national interests,” Grayson said when asked to respond to the assertion from President Barack Obama that the Syrian crisis is a threat to American national security. “The greatest norm, the highest norm in international law, is that you don’t attack another country unilaterally without the authorization of the United Nations.”

“We can’t simply go and bomb people whenever we feel like it,” he continued.

“Is standing by and doing nothing really an option?” Berman asked.

“Well, frankly, you have overstated and the secretary certainly overstated the evidence that this was a deliberate decision made by the high command in Syria,” Grayson replied. “Even if we had undeniable evidence, the fact is it’s simply not our reasonability.”

“Sometimes, everyone needs to learn to learn the principle, mind your own business,” Grayson added.

Grayson added that, if there was a chemical attack, there is no evidence that the Assad regime carried out that attack deliberately.