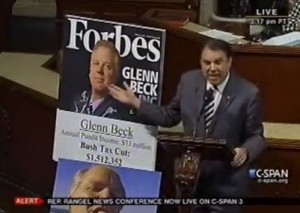 Wow. Despite Alan Grayson losing his election last in November, he has not softened up, at all. Case in point, his tour de force on the House floor earlier today. The issue at hand? The Bush Tax Cuts, that Grayson alleges only benefits the wealthiest Americans. The targets? The conservatives talking heads that populate Fox News every evening, often championing the very Bush Tax cuts at hand. The strategy? Demonstrate just how much each pundit stands to make by the extending of the tax cuts. The result? Brilliant television that is certain to both get attention and rile Grayson’s adversaries. Just what he wants.

Website editors often refer to online slideshows as “link bait,” a cheap trick to attract visitors and boost pageviews. What you are about to watch appears to be the House of Representatives version of an editorial slideshow. And look, it worked! Read the rough transcript that follows the video from C-Span below:

They tell us it will boost the economy well I haven’t noticed that happening for nine years either. So you have to wonder why they persist in this mania, this obsession of theirs that we need to have tax cuts for the rich when the economy is flat on its back and unemployment is almost 10%. I think I have the answer. The answer turns out to be very simple.

They want tax cuts for the rich because they want a tax cut for themselves. What do I mean by that? Let’s take a look at the people who are really in charge, the ones who actually run the Republican party.

Let’s start with this gentleman here, the man with the cigar, Rush Limbaugh. Doesn’t he look happy? According according to Newsweek, he makes $58.7 million a year, and extending the tax cuts means he’ll have another $2.7 million. Mega dittos, Rush, and mega money. Let’s look at the next one.

Here’s Glenn Beck, according to Newsweek Glenn Beck makes $33 million a year as a pundit and extending the Bush Tax Cuts means a cool $1.5 million for Glenn bBeck’s ongoing imitation of Howard Beale from Network. Now let’s look at the next one.

Sean Hannity. Newsweek says that Sean Hannity, this man of the people makes $22 million a year from his act on Fox. And that means the Bush Tax cuts mean an extra $1 million. $1 million for Sean Hannity. Maybe he can afford some anger management classes. Let’s take a look at the next one.

Bill O’Reilly. He makes a modest $20 million a year from his gig on Fox. That means that the Bush tax cuts give him not quite seven figures, nearly $914,000 of extra cash. It’s easy to see why Bill O’Reilly wants to see the Bush tax cuts extended. And I have to say, he’s no pinhead when it comes to that.

And Now, Sarah Palin. Sarah Palin has made $14 million this year from cashing in on her fame. In fact, she’s done a better job of turning fame into cash than anyone in American history. $14 million. So she wants the Bush tax cuts extended so she can make an extra cool $638,000. As she was — as she would gesture (shoulder shrug.)

And now on to Newt Gingrich, the man who did such a great job of running America in the 1990’s, he wants a second chance in this decade. Newt if you do to us now what you did to us then, we’ll be in trouble. But Newt Gingrich makes $5 million a year from his punditry, he’ll get an extra quarter million dollars a year. An extra quarter million dollars a year from the Bush tax cuts being extended.

Now let’s go on to the big cheese. George W. Bush himself. The man who got us into two endless war. The man who brought us to the brink of national bankruptcy. The man who gave us $4 a gallon gasoline. George W. Bush makes a cull $4.2 million a year, according to Newsweek. That means that extending the bush tax cuts for George Bush means an extra $187,000 in his pockets every single year.

I have a better idea. Instead of placating these people and letting them spew out onto the airwaves their lies about the Bush tax cut ever revealing the fact that they stand to gain millions, millions of dollars each year from their selfish desire to take advantage of the rest of America, let’s do this. Let’s take that money and create jobs.