Alan Simpson On Fox Business: The ‘Nuts’ In Congress Who Refuse To Compromise Should ‘Go Home’ 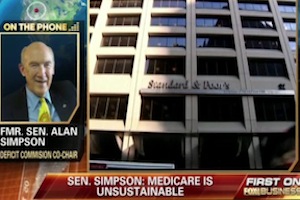 Deficit Commission Co-Chair, former Republican Senator and always outspoken critic Alan Simpson shared his thoughts on the S&P downgrade during a phone call today on the Fox Business Network. Simpson declared he found it “stunning that people are disgusted” when everyone in Washington knows what’s really going on and scolded everyone who is complaining now by telling them “what did they think was going to happen?”

Simpson blamed everyone across the board for the downgrade, since no one listened to the recommendations of his commission. Yet he was particularly critical of Tea Party Republicans in Congress:

“[Obama] is smarter than rigid people who don’t compromise on anything. If you came to Congress not to compromise you’re totally ineffective, you oughta’ go home. You can compromise an issue without compromising yourself. These guys think the word compromise is a silly word. They’re nuts!”

Some other unique pearls of wisdom from Simpson include telling Republicans who are opposed to new taxes to “go back to school” and warning “if you can’t do something with Medicare, forget what you call it Obamacare or Jack Benney Care, makes no sense it’s just unsustainable.” Although beneath all of Simpson’s bizarre and sometimes funny language, he did make one interesting prediction regarding the potential success of the new “Super Committee” to find and approve of additional spending cuts. Simpson warned, “if you don’t see [Senators from] the Gang of Six become part of this new super group of 12, then you know that [the Congressional leadership] rigged it for failure.”