Alec Baldwin Hits Media On Stern: ‘Shocked’ By Anderson Cooper’s Swipe, ‘Nothing Put Out By News Corp Is True’ 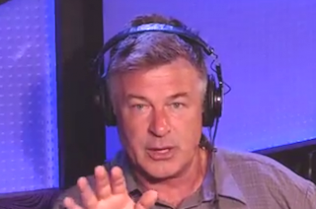 Alec Baldwin appeared on Howard Stern’s SiriusXM satellite radio show this morning and laid out everything that he thinks is wrong with the media. The actor slammed not only News Corp. and Fox News, but all mainstream media outlets for being fundamentally untrue, and said he was “shocked” that Anderson Cooper criticized his most recent Twitter rant.

“Do you think the New York Post has it in for you, in a sense, because you’re liberal?” Stern asked Baldwin, who has had his share of confrontations with that paper’s reporters and photographers in the past.

“How could you possibly ask that question?” Baldwin responded, revealing some level of irony. “Very quickly, I realized nothing handled by News Corp. is true, nothing on Fox,” he continued. “And now I take that and I extend that to all media.”

Getting more specifically into his recent Twitter outburst, seen by some as ‘homophobic,’ against a UK Daily Mail reporter, who had accused his wife of tweeting through James Gandolfini‘s funeral, Baldwin said he was criticism from CNN’s Anderson Cooper that surprised him the most.

“That was the one that shocked me the most,” Baldwin said of Cooper, who tweeted, “Why does Alec Baldwin get a pass when he uses gay slurs? If a conservative talked of beating up a ‘queen’ they would be vilified.” Stern tried to goad Baldwin into saying something negative about Cooper, but the actor didn’t take the bait.

Stern predicted it would continue to be difficult for Baldwin to abandon Twitter for good, as he has often promised to do, because “you love mixing it up. You’re an opinionated guy.”

Watch video below, via HowardTV: