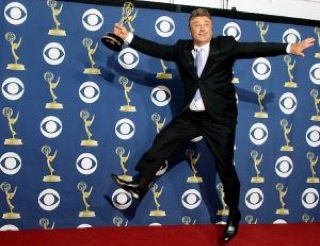 Bad news for Emmy viewers who were hoping to catch Alec Baldwin tonight– an off-color phone hacking joke seems to have prompted the actor to abandon the project, leaving a trail of angry tweets behind him. The drama started last Thursday, when Baldwin was notified that a joke about the Murdoch phone hacking scandal may have been cut from an introductory comedy bit. With that rumor confirmed tonight, the actor is boycotting the Emmys and, apparently, spending the night at his trusty keyboard instead.

“Fox did kill my NewsCorp hacking joke. Which sucks bc I think it would have made them look better. A little,” tweeted Baldwin this evening, before announcing that he was done with the bit. According to Entertainment Weekly, Fox claims the joke wasn’t cut by News Corp, but simply considered “in poor taste”:

On Thursday, Baldwin had tweeted “I did a short Emmy pretape a few days ago. Now they tell me NewsCorp may cut the funniest line.”

Apparently, Fox was uncomfortable including a joke that Baldwin made that had to do with Murdoch and the much-publicized phone-hacking scandal, and they had it cut from Baldwin’s script. When EW talked to Fox, the network was very clear that the decision to cut the joke was made at the Fox level — not by anyone at News Corp. Fox also claims that the reason the joke was cut was not because of Murdoch’s name, but because it was in poor taste to make light of the serious allegations surrounding the phone-hacking scandal.

Everyone’s favorite Hollywood liberal activist who also loves banks seems not to be buying that story, however, as his Twitter feed has been in overdrive for the past hour or so, culminating by telling his followers he wasn’t the first or last to go to the “media woodshed,” and taking and even tougher stance against News Corporation: 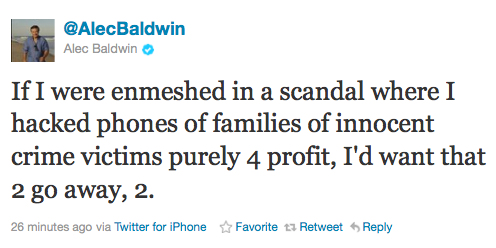 Tangled up in this rage were also some derisive comments about Citizens United.

While Fox seems to have released their definitive statement on the matter, Baldwin’s tweets will likely not be the last word on this, as Baldwin himself and his show, 30 Rock, is up for a few Emmys, and the most critical piece of this drama puzzle– the content of said “joke in poor taste”– is as of yet undisclosed.