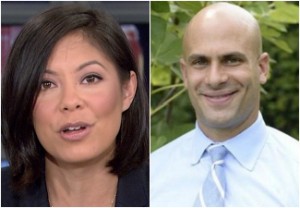 If there’s ever some kind of retrospective on one of the least memorable programs in cable news history, that’s how the story ends for Alex Wagner Now courtesy of its host and the final two words uttered on her program.

Freud once said there are no accidents, and that invariably applies to dropping expletives on live TV. Yes, sometimes a word or name can simply come out wrong (See Megyn Kelly’s oops introducing Mike Huckabee with an “f”) and those kind of unfortunate mistakes are part of the perils of live TV. But in Wagner’s case, her final two words of Now was something that could have been entirely avoided. It also showed Wagner’s sense of entitlement (more on that in a moment). And the look on Andy Lack’s face had to be one of disbelief, as in, “What? We can’t even do this right?”

A mistake in the heat of emotion? Don’t think so. For what’s it worth, I host a show weeknights (check out a sample here! Shameless, I know…) and know it would take a huge departure from reality to forget I’m on the air and get to that kind of word regardless of emotion or not. It’s why I always thought Bob Beckel swearing on the air on a relatively consistent basis was a gaffe in the throes of battle at first, but then eventually became simply an act to attract attention. Note: You’re surrounded by cameras and sitting under a dozen lights. Trust me…you don’t just suddenly forget you’re broadcasting to millions (Or in Wagner’s case, thousands). Dropping an expletive on the air isn’t the end of the world…it’s just the timing in this case couldn’t be any worse.

And by the way, with that other line she threw out there about reports of her demise being greatly exaggerated, she basically thumbed her nose at fired MSNBC personnel like Abby Huntsman, Krystal Ball, Toure and Ed Schultz who–regardless of your perspective on their respective level of talent (Huntsman will end up at CNN…you read that here first)–probably weren’t cheering on Wagner for reminding them she survived.

So why does she get to keep a job? Well, she can be engaging, has a unique look cable execs drool over…there is some there there…but in a decidedly lighter role. Maybe that comes via fluffy reports from the field during the 2016 campaign. Maybe she gets a few at-bats for the Mothership on Weekend Today. Perhaps she’ll be paired in some capacity with recently-hired former White House Chef Sam Kass (Title in a world where having “senior” in your title makes you more important and stuff: “Senior Food Analyst”), who may be the ultimate reason why Wagner gets to stay on while others are updating their LinkedIn pages: Because if you’re NBC, how can you hire Kass and dump his wife in the same week? In the end, Kass helped secure Wagner’s place at the network for at least the length of his contract.

As for the aforementioned “reports” of her demise, that part never existed in my exclusive a week ago on The Cycle, Now with Alex Wagner and The Ed Show being cancelled, the last of the three being replaced by Chuck Todd. Nobody said Wagner was going anywhere, just her clumsy program, which rarely broke 50k in the demo and once even had trouble breaking 20k, which is almost mathematically impossible given MSNBC’s reach.

And that’s how it goes in the world of cable news: Some are shown the door not because of what they can bring to a network, but because they simply weren’t born into the right family. Alex Wagner is the daughter of longtime democratic operative who co-chaired Bill Clinton’s presidential campaign and had a wedding not too long ago attended by the president and first lady. Good for her, as those are the kind of connections that make someone stay on the right side of the fence when pink slips are being handed out.

Alex Wagner has a great look, yes. She can be engaging when not trying to tackle important topics, sure. But when it comes to long goodbyes, she showed she really needs to take a class in exhibiting a little class.