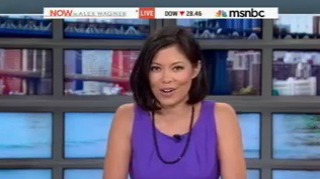 As MSNBC’s prime time programming has shifted into left-leaning point of view programming, the network appears to have captured a market advantage. The ratings have spiked and, in the last several months, they are often competitive with Fox News Channel in the key demographic. The success of MSNBC’s prime time programming has, however, apparently begun to alter how the cable news network approaches their dayside programs. Where the 9 a.m. to 3 p.m. ET block was once devoted to what the network said was straight, unbiased news programming, it is now leaning further towards left-leaning commentary and analysis. The most self-evident example of the shift to point of view programming in MSNBC’s dayside is Alex Wagner’s panel program NOW.

On October 10 alone, Wagner opened her program with a monologue admonishing Mitt Romney for his flip flopping on abortion rights issues (although, as I noted in this post, she had to selectively edit a 2007 presidential debate featuring Romney in order to make that point). Her panel of four guests has recently become bereft of conservatives. Yesterday featured Georgetown University Professor Michael Eric Dyson, MSNBC host and Salon.com editor Steve Kornacki, The Grio editor Joy-Ann Reid and New York Times Magazine editor Hugo Lindgren. All the while, featuring chyrons like “Bird Brained” when discussing Mitt Romney’s promise to end federal subsidization of PBS programming or “Mitt-Go-Round” when describing Romney’s evolution on abortion. While Wagner’s panel is rarely bereft of Republican guests, they are almost always outnumbered.

RELATED: Why MSNBC’s The Cycle Will Shape The Future Of Cable News

Here’s the thing: this is working. MSNBC has grown in the ratings and Wagner’s show has grown into a provocative and informative program, if unabashedly left-leaning. There is nothing wrong with that. But there is something untoward with MSNBC standing by the claim that their dayside programming is entirely neutral and eschews editorial opinion. That flies in the face of reality.

Most of MSNBC’s dayside continues to strive for neutrality. Without question, reporters like Chris Jansing, Chuck Todd and Andrea Mitchell do their best to avoid the perception that they are playing favorites. To a lesser extent, the same could be said for news anchors Thomas Roberts and Tamron Hall – though Mediaite has chronicled more than a handful of occasions when they have climbed down from the referee’s chair to enter a debate with their more conservative guests.

The bottom line: MSNBC’s new point of view programming – spanning both the dayside and prime time – has been a smart programming maneuver. As I wrote yesterday about The Cycle, there are programming decision makers at MSNBC seem to be more focused on informing their audience over ratings grabbing. That is a laudable goal and it should be encouraged. However, to pretend, as MSNBC continues to do, that their dayside is not as opinion-driven as their primetime is simply disingenuous.