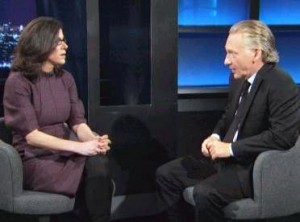 Alexandra Pelosi appeared on Real Time tonight with two purposes: to defend the video she filmed of voters in Mississippi that aired on the show last week, and to air a brand-new video that Bill Maher admitted would probably anger liberals in the same way the aforementioned video angered conservatives. For her new video, Pelosi spoke to African-American welfare recipients in New York. There was far less laughter during this piece than the Mississippi one (which Pelosi pointed out after it played), but there were still some revealing moments contained therein. One of the men lined up outside the welfare office said he was more interested in collecting than going across the street to try and find a job. Pelosi asked surprisingly tough questions, like “When was the last time you actually worked?” and “Why should my tax dollars be going to you?”

Maher joked before the video aired that Pelosi might not want to reveal her real New York address in case anyone has a problem with the video. Pelosi revealed afterwards that some of the people she spoke to at HBO told her that the video was too controversial for TV. She noted a slight hypocrisy between the willingness to run a video of “toothless rednecks, but when it’s our neighbors,” it becomes a problem. However, she and Maher did make sure to give some context to the two videos so that they were not completely equating both situations. Pelosi contrasted the money spent by the government on food stamps as opposed to defense, which gets a significantly larger portion of the federal budget.

Because this video depicted just as extreme a side as Pelosi’s first piece, she predicted there would be a similar response from the left complaining about her new video.

“These are stereotypes. They’re just snapshots. Now, by Monday morning, you’re going to have the left wing feeding frenzy attacking you for making the Democrats look bad.”

Maher joked that some might interpret the video as both himself and Pelosi being racists, which Maher said would be absurd because of his donation to President Obama‘s Super PAC. He did acknowledge that some of the people in the New York video do have real problems to deal with, because there is a stronger “legacy” to that as opposed to anything uttered by the Mississippians in the first video. And as for that piece, Maher also defended himself against the idea that he was being condescending to those people.

“When I see the toothless guy, as a liberal, I say, ‘I want to help you get teeth.’ Why does that make me an asshole? I don’t understand why… ‘You damn Yankee trying to get me teeth!'”

Maher predicted Pelosi’s new video would drive Fox News crazy because it gave a slightly negative depiction of welfare recipients (and Obama supporters), but it came from two liberals.