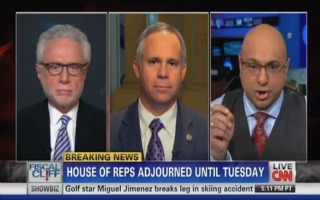 CNN’s Ali Velshi tore into GOP Rep. Tim Huelskamp (R-KN) Monday night about his claim that a tax hike on small business would hurt job creation. Telling Huelskamp he didn’t “believe” his numbers to be true, Velshi mockingly asked, “The vast majority of those businesses are in fact not job creators. You understand that to be the case?”

Velshi then proceeded to silence Huelskamp from speaking any further, saying, “Sir, you put out information to our viewers, you’re on CNN right now. I would like the information to be accurate.” Huelskamp fought to answer, and when he was asked by Velshi whether he wanted to stand by his information, he said, “That’s our best guess. We’re still working on that.”

This is the second time this week Velshi has expressed frustration over the fiscal cliff, blasting Congressional leaders Sunday night for their inability to make a deal. “Today isn’t the day” for “details”, he said, but is the day to “stop this economy from going over the edge.”

Watch full clip below, via CNN: