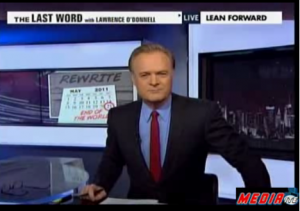 On tonight’s “Rewrite,” Last Word host Lawrence O’Donnell, though certainly weary from single-handedly defending the world against the menace that is was Donald Trump, summoned the strength to take on charlatans proselytizing about the end of the world. He set his sights on The Doomsday Code, a book by Christian radio broadcaster and Family Radio president Harold Camping. If Camping’s name sounds familiar, you may have listened in on his radio programming – available on 150 outlets. Or, perhaps, you’re aware of his earlier book, 1994?, which had predicted that the Rapture would occur in – You guessed it! – 1994 (?).

Camping is on O’Donnell’s radar tonight because his new book states that, according to information provided in the Bible (specifically, the Book of Jeremiah), the Rapture will unfold on May 21, 2011 at approximately 6 P.M. Pacific Time. For real this time.

I knew O’Donnell’s segment was going to essentially fill my heart with light and laughter and various Lisa Frank cartoons because: 1) Since when does MSNBC cover the Rapture? How exciting! 2) When does anyone, short of cable access hosts shooting segments in their basements, ever seriously discuss predictions about the world’s end? 3) O’Donnell said that he “predicts outcomes of elections.” Like, as part of his job. I had not known this. Color me enticed!

So why did O’Donnell see it fit to devote a segment of his show to something the vast majority of Americans would likely view as, to put it rather folksily, “utter hogwash”? Because no one else will, and because “too many people” are taking Camping’s claims seriously. For Pete’s sake, America, some pregnant woman out there is trying to spend every last penny she has in anticipation of next Saturday’s special event. Who will convince her she’s in the wrong if not an MSNBC pundit?

Please, allow O’Donnell to make his case for you:

Any plans you have made for the world to end on May 21st are a mistake, a terrible mistake. You should go back to putting money in your 401Ks. And when the world doesn’t end on May 21st and you realize Harold Camping is a complete fraud and you feel confused and adrift in the world and don’t know where to look for guidance, just know that, on May 23rd at 8 P.M, the man who told you the truth about the end of the world will be once again sitting in this chair, telling you more truth.

And from that day forth, having renounced the teachings of Harold Camping, you will always have this program to come to to help you see the light.

Thank you, Mr. O’Donnell. Thank you.