All Tuckered Out: Tucker Carlson Falls Asleep on Fox & Friends 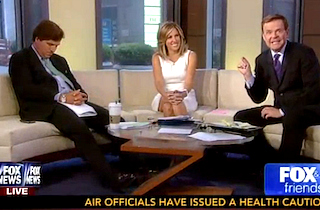 Fox News analyst Tucker Carlson dozed off during a live broadcast of Fox & Friends Saturday morning, in what one cohost claimed was the first instance of someone falling asleep on air in the entire history of the show. Carlson confirmed his slumber via direct message to Mediaite. “Oh yes,” he said. “Dead asleep.”

When the show came back from commercial break, Carlson was asleep with his head down. “He’s really asleep,” cohost Mike Jerrick whispered, while laughter from the crew could be heard in the background. They waited a moment to wake him, and Alisyn Camerota wondered if they “were being bad cohosts.”

When Carlson awoke, he thought they were still on commercial break. “Good to see ya,” Jerrick said. “Welcome to Fox & Friends.”

“I know we’re not on television, so it doesn’t bother me,” Carlson said. When he realized that they were, in fact, live, he grabbed his coffee and said, “I’m just going to roll with it.”

Carlson had subbed for Hannity the night before and had to be up extremely early to begin F&F.

The show later rebroadcast the incident with “Sweet Dreams” playing in the background, and Jerrick found a clip of the incident already posted on YouTube. “It’s impossible to embarrass me,” Carlson said. “I danced on television, so, what, you’re going to hurt my feelings? I don’t have any left.”

Watch both clips below, via Fox News: