Allen West Blasts Payroll Tax Cut: ‘We’re Going To Accumulate A List Of Things $40 Does Not Get You’
video

Allen West Blasts Payroll Tax Cut: ‘We’re Going To Accumulate A List Of Things $40 Does Not Get You’ 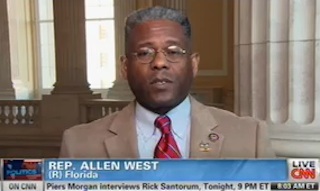 “Not if we’re going to do it on the backs of American homeowners, I won’t support that,” West, who O’Brien suggested could be a co-anchor on the show because of his frequent appearances, explained. “It’s about time that we get pretty genuine with the American people and not give them political gimmicks. Let’s start doing the things that look out for our future, not a short term economic band aid.”

West later added that, “I think that I have to be responsible to the American people, I have to be accountable to them… It’s about time we get people who are serious and going to work for hard-working American taxpayers and not just tell them lies so we can get elected.”

O’Brien noted that President Obama has been promoting a What Does $40 Mean To You? angle to the payroll tax cut debate.

“They have this thing about what would $40 do for you? It’s been very effective,” She explained, noting that people wriitng into the campaign will say $40 is three or four days of food, $40 is a tank of gas, $40 is half of my electric bill. This is a very effective political tool for the Obama Administration. Do you run the risk of losing on that front?” O’Brien pressed West.

“Well, what you just said is indicative of the problem in Washington DC,” West replied. “You said a political tool. That means this is not about good policy. That means it’s not about the future for this country. As a matter of fact, we’re going to accumulate our own list of the top ten things that $40 does not get you. As a matter of fact, I can’t fill up a tank of gas in my vehicle back home with $40 of gas. Soledad, think about what we’re doing for our seniors. We’re pushing Social Security closer to the end of a cliff.”

West added that, ‘the actuaries and the trustees have already said we’re looking at ten years before we have bankruptcy with Medicare and following that, Social Security with probably 25 to 30% with degradation of benefits. These are the things we need to say to the American people not playing games with them based upon $40.”

Watch O’Brien’s full interview with West below via CNN: