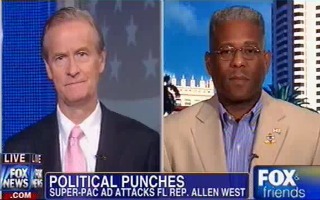 On Friday, Rep. Allen West (R-FL) appeared on Fox & Friends to address a Democratic PAC ad which depicts him punching an old lady while accusing him of wanting to end Medicare. West attacked the ad and the Democratic party, but also went after African-American leaders and leadership organizations who he said were sure to not come to his defense because he is a black conservative.

“Can you imagine if there was a white politician were in a commercial punching a woman of color? There would be national outrage,” said Steve Doocy.

West agreed and said this conduct is part of the “duplicity of the liberal left,” which he thinks believes can attack a “black conservative” with impunity.

“Think if the Republican party, or if some conservative PAC, ran a picture of a black Democrat politician or Congressman punching white women and white seniors, I’m sure that MSNBC, NBC and the Huffington Post – everyone would be going apoplectic right now,” said West.

West said that Democrats play by different rules, and said that Republican presidential candidate Mitt Romney is encountering similar treatment in recent ads released by Democratic groups against him.

West went on to challenge the assertion in the ad that he supports ending Medicare “as we know it.” West said that his opponents should read the “Fiscal Year 2012 Actuary Report that says Medicare goes bankrupt in 12 years.”

“So, the double standard is because you are a conservative,” asked Doocy.

“Yeah,” West replied. “Where is the outrage from Jesse Jackson and Al Sharpton and the NAACP about this? They’re not going to say anything because they’re nothing but an effective wing of the Democrat party and they have effectively kept them well-placed so that they can continue to make sure that they have a black electorate voting bloc.